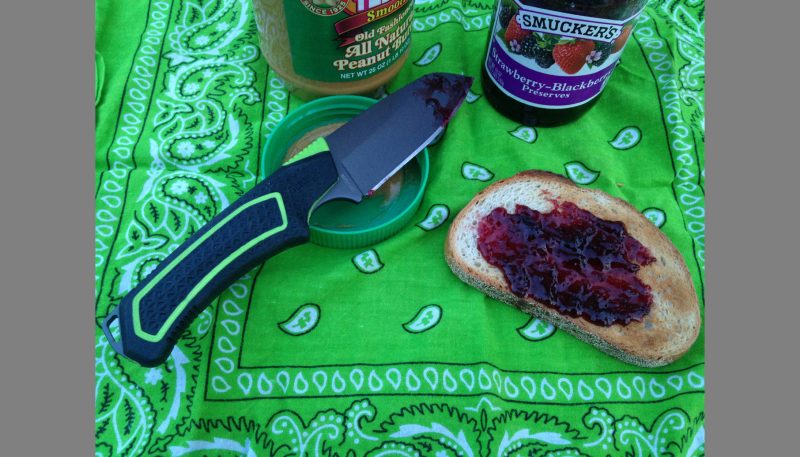 I really like that companies like Gerber–known for multi-tools, pocket-knives and Bear Grylls—are venturing into the kitchen knife sector and the Gerber Freescape Camp Kitchen Knife represents that sector well. In most cases, I’ll use my standard custom chopper (RMKW “Rosie”) for wood chopping and food prep–but realistically, there can be some cross contamination (imagine Poison Ivy in your mouth). So, to have a specific knife for food prep–that isn’t a cheap kitchen knife and isn’t overly expensive–is a treat. Gerber did a really good job here.

Construction & Materials
Although the knife is well made and durable, the rubber handle feels and looks a little cheap. In some cases I had little particles from the rubber left in my palm after using it to cut up a meal. The sheath is also a bit slap-dash, but this isn’t a knife you need to really focus on the sheath for it to prove to be a great knife.

Ease Of Use
Santoku knives are usually designed with scallops in the blade so that certain foods won’t stick to it and you can continue cutting with ease. This knife does not have those scallops, so potatoes and chicken were a bit of a challenge but, otherwise, cutting cooked food was a breeze.

Steel Quality & Edge Retention
Folks familiar with kitchen cutlery will know that it needs to be sharpened more often than not–this is due partly to the fact that those knives are pretty thin and don’t really have a good angle on which to create a grind. Gerber built this knife up thicker and sharpened it like a standard backpacking knife so it holds a great edge even after cutting through pounds of steak tips on the trail (I eat like a king when I’m climbing the sides of trap rock hills).

Durability
This isn’t the type of knife you want to bushwhack but it’s going to hold up pretty well if you use it for its purpose–food prep. Still, because of its beefy design, you could go off and use it in other situations if needed. In one case, I cut kindling with it and had no issues. I had to lop off a couple of ratings points for the sheath because I don’t think it will stand the test of time. It held up fairly well for me so far, but I may end up making my own sheath out of Kydex, as I want to keep this in the cutlery lineup for backpacking and car camping.

Value
Having just purchased a new set of kitchen knives, I can tell you that based on price alone, this is a great deal. After using it for a while–in the kitchen and in the woods–I can further confirm that this knife is worth its asking price.