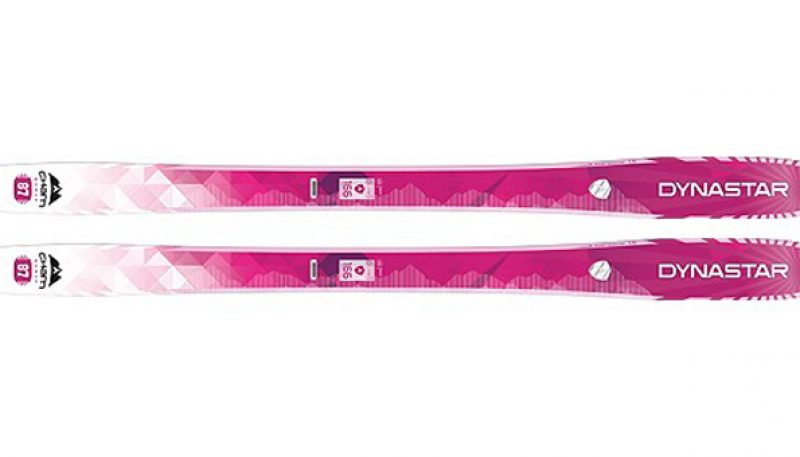 As a light and easy-turning ski with a progressive five point sidecut design, the Cham W 87’s best attributes are its playfulness and flotation in soft or cut up snow. Vertical sidewalls means it has a decent ability to carve but the long rockered tips get wobbly at high speeds. The ski performs best in soft snow.

Riding on the pintails of the unisex Cham Freeride series, skis in the women’s line are lighter but share the same sidecut. The tech story of the Cham W 87 includes full-length vertical sidewalls, a long rockered tip, a flat pintail and a core made of paulownia wood and fiberglass laminate. The widest point of the ski is not the tip (109mm), but the forebody (127mm). The 5-point sidecut also includes an 87mm waist and a 90mm tail.

Responsiveness
The Cham W 87 is easy to initiate turns with and can hold an edge, thanks to camber underfoot and full length vertical sidewalls. The ski rolls easily on edge at slow to medium speeds but it “tops out” at high speeds meaning that that wide forebody and long rockered tips start to chatter and feel wobbly. The front end of the ski doesn’t bite into the snow as races skis do. But the ski engages easily and the narrow tails tracks throughout the turn without hooking up. That also means there is not a lot of energy created in the turn but the ski favors more freeride turns than ex-racer turns.

To me, it favors big, wide turns though the turning radius is 13m at 166cm length. It doesn’t have turn-on-a-dime edge grip, but instead has what feels like a new-school ability to carve, slarve and smear turns with small changes in edge pressure and weight. The 87mm waist makes it groomer friendly, but soft groomers as opposed to icy ones. It transitions well from groomers to bumps since the flex is pretty soft and the rocker extends long down the tip adding maneuverability. It’s a good choice for skiing groomers and shallow powder as well as soft bumps and lightly chopped snow.

Float
The long rockered tip keeps the ski planing on the snow’s surface, extending down the wide forebody. But at only 87mm underfoot, this model is best for shallow powder.  Look to the Cham W 97 or 107 for better flotation in powder. The 87 cuts through crud, but gets a little tossed around in chowder or cut up powder that has set up.

Versatility
The Cham W 87 transitions well between groomers, bumps and chopped snow. It has enough carving ability to hold up for the frontside but can also handle variable conditions on the backside. It is not lively, and not dead, but the flex feels somewhere in the middle. It might be too light for some who want hard-charging edge grip and energy for the entire mountain, but for most it has a friendly feel in a variety of terrain and conditions.

All in all, this is a fun, light and easy-to-maneuver all-mountain ski for light snowfall or for days after a storm. It’s not an icy, hardpack charger or the surfy big powder day board.

Stability
At high speeds, the tip starts to chatter. The ski also does not charge through crud like you find on south-facing slopes, the sort of snow some skis can plow through like a tank. It also has a relatively soft flex and is made from lightweight paulownia. That said, the geometry creates stability when not pushed to the limits of what you find around the mountain. It’s easy to stay balanced on it in a variety of snow conditions and it can handle different kinds of turns and ability levels.

Forgiveness
The Cham W 87 is easy to control in mixed conditions and therefore friendly for intermediates as well as being fun for experts. Since it can carve or smear, it’s forgiving for a variety of technical abilities.

Value
The suggested retail price (remember shops charge less than MSRP) is $700 for a flat ski. It will get attention on the chairlift because of the unique design and sunburst graphics. Women who ski primarily in the west or northwest can use it as a one-ski quiver, though it won’t be wide enough for deep powder days.