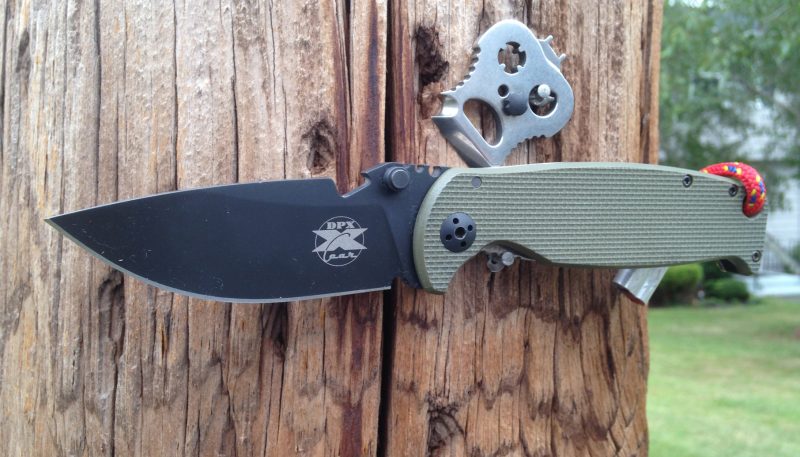 The DPx Gear HEST 2.0 reigns high in form and function and that is something I expect from the designer (Robert Young Pelton) and the fabricator (Lion Steel). In a market where some manufacturers are struggling to keep up with the newest and coolest materials, DPx Gear relies on tried and true materials (D2, Titanium, G10) to create tools that will outlast the Apocalypse. The compact design of the folding knife, which can then be transformed into a fixed blade knife, proves how confident DPx is with their products. It was a pleasure beating up this knife.

Construction & Materials
To create a tool that functions as both a folding knife and a fixed-blade knife is no easy task, but the RotoBlock feature does this quite well. The RotoBlock locks the frame lock, preventing it from being released accidentally or intentionally. I should add, however, that the frame lock on the HEST 2.0 is so effective that the RotoBlock is an option more than a necessity. Choosing D2 tool steel for the knife material was the right choice, as it will take a beating—which the rest of the knife was designed for.

Ease Of Use
I am not completely convinced that DPx Gear needed to offer a left and right-handed model for the HEST 2.0, because the knife works well in both hands. It is sized perfectly when used in both the fixed and folding configuration and the notch on the back—which is being touted as a bottle opener / wire stripper—comes in handing for prying as well. Unfortunately, that same notch allows the knife to pull open when you’re pulling it out of your pocket. You can train yourself to overcome this, but you may be down a pair of pants before you do.

Steel Quality / Edge Retention
D2 tool steel is very tough and holds an edge for a decent amount of time. When it’s time to re-sharpen, you can achieve a good edge, but you’ll want to keep plenty of oil on that stone as D2 is stubborn all around. D2 is not known to have the best corrosion resistance, so the addition of the black coating on this model is an added benefit.

Durability
When Robert Young Pelton, the mastermind behind DPx Gear, sets out to design a tool—he does so using personal past experiences to create something that can withstand the most hostile of conditions. Creating a tool that acts as both fixed blade and folding knife was a major undertaking, and Mr. Pelton succeeded on many levels with the HEST 2.0. You would be hard-pressed to destroy this knife, which features 0.19” thick blade steel. It’s a mammoth.

Value
The suggested retail on the DPx Gear HEST 2.0 is $260.  This knife costs about $75 more to than other knives of this caliber and in this category. But I believe extra cost includes the price of the included adjustment tool, which is necessary to perform some maintenance tasks.