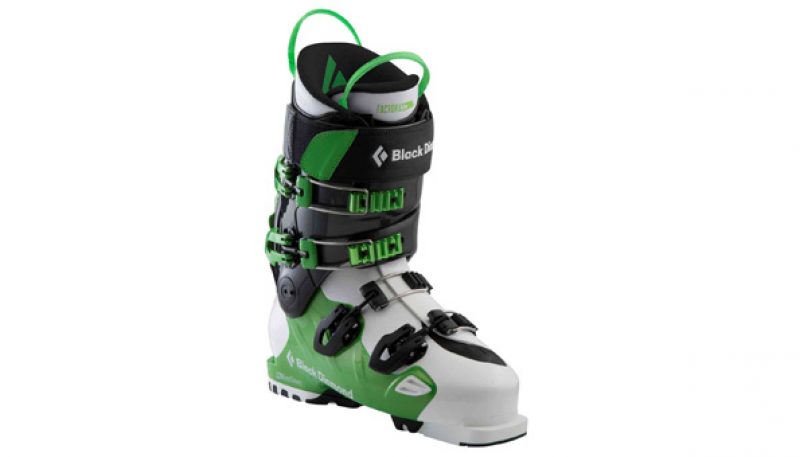 The upgraded Factor Mx is a solid offering from BD, and outperformed its predecessor in skiing and touring. I think it’s best served for those who primarily want an ergonomic boot for rat packing around the resort, but don’t mind hiking or skinning for additional turns.

I’m happy BD got rid of the Boa closure liner for their freeride gun. In doing so, they shed a little weight, and although I didn’t have any complaints skiing the boot outright, I found them very comfy and better performing after I heat molded them. Built like a traditional alpine liner (but not quite as posh), but with a flex notch at the Achilles heel to accommodate walking, the plastic-covered tongue (and upper reaches) transferred power from my legs to the ski very consistently, and I enjoyed snapping short swing turns in tight trees and craggy little chutes around my home hill in Jackson.

The ankle pocket had terrific hold when I skied mank conditions while on the clock at the resort too. Even under the terrible weight and carrying performance of a bomb-filled ABS pack (arguably the worst in the industry), I felt the Factors helped keep me centered over my skis during control mornings.

The back spine of the boot’s shell didn’t let me fall into the back seat as other freeride boots sometimes can, which is a total plus for a hack like me. I also liked the moderate forward lean that gave me total control to charge on hardpack and groomers, but not too much so as not to enjoy the neutral stance of pleasure in softer snow.

The walking ergonomics were standard faire. The quick switch is a little small but easy enough to flick with a gloved hand. The range of motion when unlocked is very good, if not great, and the slight rockered nature of the tech sole complimented my natural stride. That said, the Factor Mx is still better suited for quick hits and not big slogs. Just because it can, doesn’t mean it should.

BD claims the Factor has a flex index of 130, but I’d put it closer to 120-125 at most. That’s fore and aft. Laterally speaking, the boots were as responsive as any alpine boot, and they put me on edge quickly, and the back and forth of short swing turns to arcing long radius super G’s was consistent and enjoyable.

At 8lbs 13oz, which isn’t that heavy, they’re almost a full pound heavier than their Scarpa competitor, the Freedom SL. Yet, as far as going downhill, both boots skied very similar; any two people could say one was slightly stiffer or smoother than the other, which is to say the difference, in my mind, is negligible. They were both very good. Best try them both on and see which makes the better fit. You win either way.