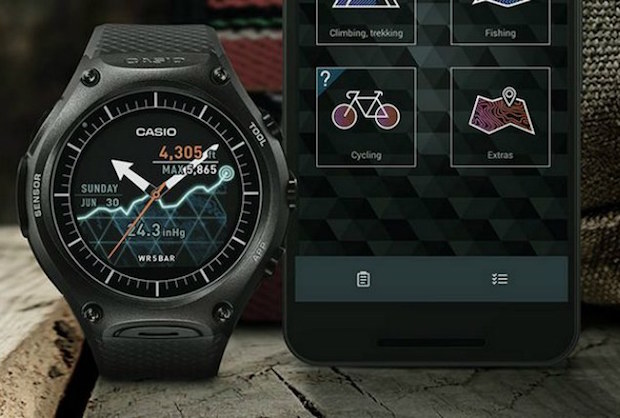 WHAT IS IT?
Aimed at outdoor enthusiasts, the Casio WSD-F10 is a rugged smartwatch designed to face every adventure with you. The first smartwatch available from Casio, the WSD-F10 utilizes Android Wear to not only allow you to effortlessly expand its functions, but to also provide a fast and fluid user interface that makes it a desirable tool for people of all walks of life. Oh, and if that wasn’t enough – it also responds to voice commands and hand gestures too.

Priced at $500, the Casio WSD-F10 is in the same price range of most touch-screen smartwatches available today. Add in the fact that it is waterproof, rugged, and features one of the most impressive user-interfaces I have ever seen, it makes you wonder why Casio isn’t charging more. The one catch in this otherwise awesome smartwatch is that it really has been designed to be paired with Android-based phones. Pairing it with Apple’s iPhone doesn’t impact any of the pre-installed functions and apps, but you are severely limited on expanding it to include much of anything from the Google Store.

OUT OF THE BOX FUNCTIONS
Date and Time
Compass
Altimeter
Barometer
Thermometer
Monochrome Display (This mode turns the WSD-F10 into a basic digital watch to maintain battery life.) 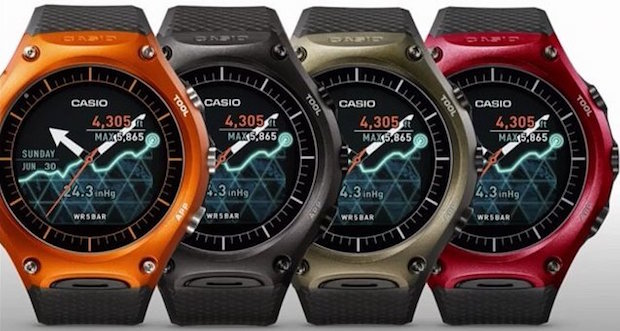 FUNCTIONS WHEN PAIRED
Note, as the WSD-F10 is app based, the functions are generally limitless, so here are some highlights of the more common functions when paired with an Android or Apple Phone:

At this point, this is where the functions of the watch generally top out if you’re an iPhone owner. However, if you’re an Android user this is the point that the barn doors are kicked wide open and the true power of the WSD-F10 and its ultra-fluid interface is unveiled. In a world where we’ve become suckers for a good user-interface, the WSD-F10 arguably destroys the competition. This fact shines through in their custom-built Trekking, Cycling, and Fishing apps but can also be seen in some of the other third party software available in the Google Play Store.

THE BUILD
The WSD-F10 is large, rugged and durable, yet strangely lightweight when compared to some of its peers. Sleek in design, there’s nothing that really stands out to prove that this watch is as durable as Casio claims it is – but, take my word for it – it is.

THE WEAR
After wearing Casio’s Mudmaster for the past six-months, switching over to the WSD-F10 is like a vacation in paradise. In comparison, they’re about the same size, but the WSD-F10 is rounded and doesn’t have the same rough features as the Mudmaster. 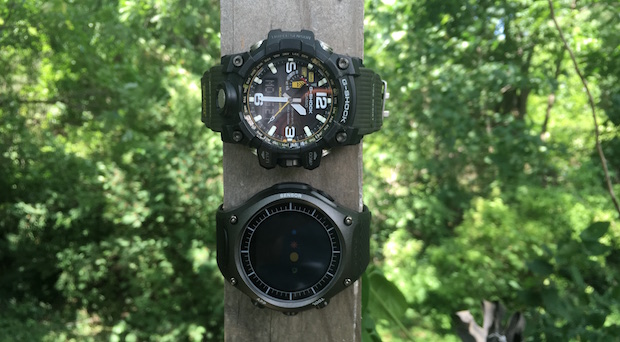 EASE OF USE
The WSD-F10 utilizes voice control and hand gestures to allow you to scroll through messages and alerts with ease. Combined with the fluid graphical user interface and intuitive touch screen, I would have to say that this watch functions more efficiently then the Apple Watch, which – to date – I thought was the most innovative smartwatch I had ever used.

FUNCTIONS
This is where I would tell an Apple iPhone user to look somewhere else for their next smartwatch. The basic functions of the WSD-F10 make it a joy to use, but knowing what the watch is capable of when paired with an Android device just leads to disappointment for iPhone owners. For the Android users of the world: look no further. You will not find another smartwatch that does this much, this well.

CHARGING
The USB-based magnetic charger that is included with the WSD-F10 is a bit of a step back in my mind. Though it’s easy to attach to the watch, it’s just as easy for the two to come apart. For anyone charging this watch on the go – it just isn’t possible. You need to leave the watch and charger on a flat, still surface while charging. Aside from that, the device takes less than two hours to fully charge. 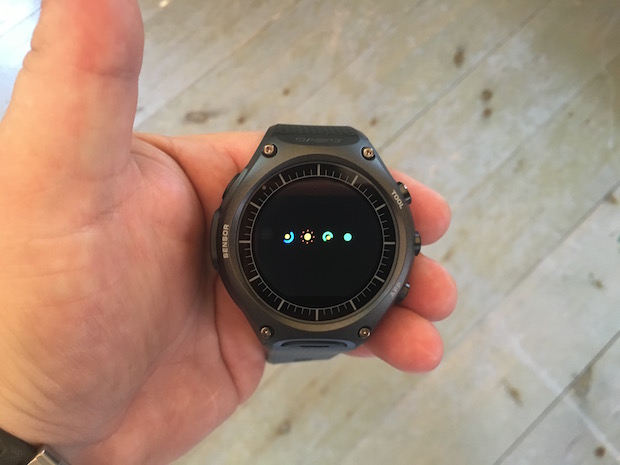 BATTERY LIFE
Casio claims that the WSD-F10 gets about a month of use on a single charge. This is true when using it as a standard watch in the Monochrome mode, which I highly recommend people keep the watch in when not using any of the smart features. Otherwise, when being used as a fully-functioning smartwatch, you can expect around three days of power off of a single charge. This timeframe will be reduced further once you start delving into some of the more complex activity apps.

OVERALL
Because of its design, build, and Android Wear utilization, the Casio WSD-F10 has the ability to be one of the most effective and appealing smartwatches on the market today – provided you’re an Android user. The only other watch to rival the WSD-F10’s graphics and fluidity would be the Apple Watch, which isn’t rugged or waterproof; making the WSD-F10 that much more appealing. Because Android Wear is used on a multitude of smart watches, its capabilities are forever expanding through apps and interface updates. This fact expands the wrist life of the WSD-F10 exponentially. However, for anyone spending a considerable amount of time in the outdoors, be prepared to charge this watch every night at camp.