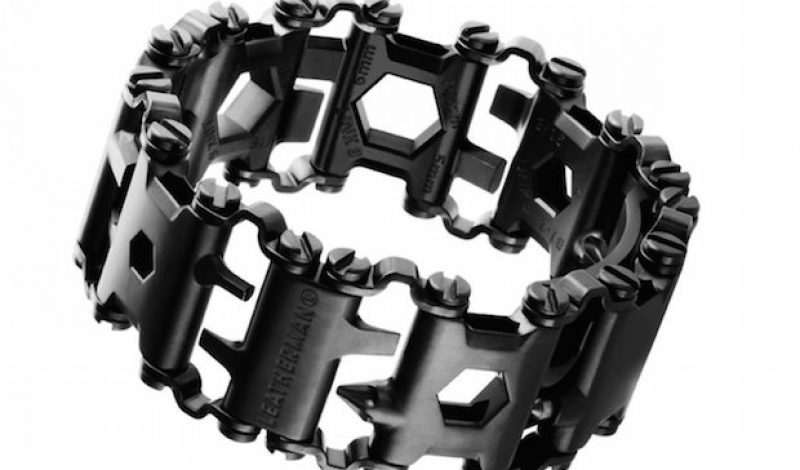 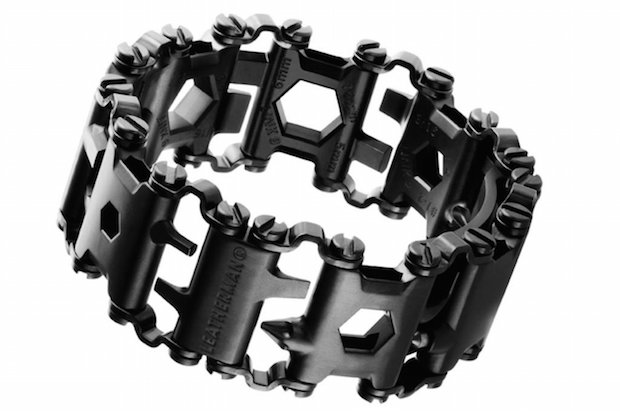 Broken down into its simplest form, the Leatherman Tread is a bracelet that happens to be made up of individual links that feature three different tools each. But from a bigger picture perspective the Tread is a TSA compliant, wearable multitool that in my humble opinion is ultimately a revolution in the world of multitools that has been built to reflect the needs of people in modern society.

But is it for everyone? At a minimal investment of $165, will you use it enough to justify the expense? I mean, just because you’re wearing it on your wrist – does that mean you’ll actually use it? More importantly, can this functioning bracelet replace your pocket multitool? All of these questions and more have been swimming around my head since the Tread was announced in January.

At the beginning of August, my sample arrived from Leatherman to “deconstruct” and ultimately prove or disprove any preconceived notions I had about this alien thing. This “wearable multitool”. 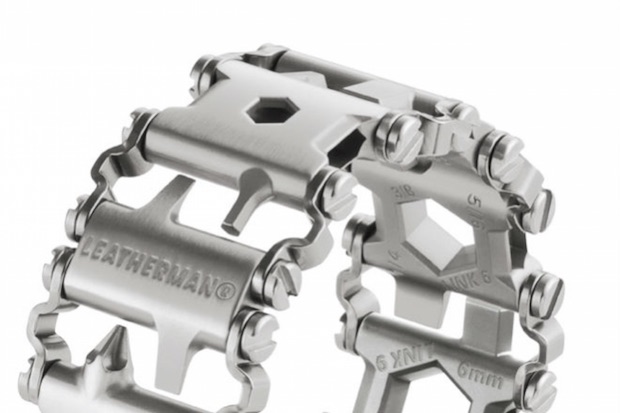 The Tread is built from ten steel links which boast twenty-nine tools in total. They range from screwdrivers to strap cutters, from hex drives to a glass breaker. Even the clasp is a tool, featuring a bottle opener, ¼” driver, and additional square drive. Each link is a little over an inch wide and the whole bracelet weighs 168 grams. I wouldn’t say it’s heavy, when compared to some of the new Smart Watches on the market, but it’s noticeable when you first start wearing it.

In approaching the Tread, I didn’t want to start the testing process right away. If anything, I wanted to get past the whole “fidgeting period” where I was messing around with it simply because it was there. My hope was that this would allow the Tread to function to its full potential in a realistic setting, rather than a forced environment fabricated for testing purposes. It took about a week for me to get used to it being on my wrist; but people didn’t make it easy on me. Thanks to its unique look and design, the Tread is a constant topic of conversation, even while standing in line at the grocery store.

In the first week I didn’t do much with the Tread except take it completely apart and reorganize the tools to fit my needs. This gave me a chance to see how the links were designed and built as well. This gave me a new appreciation for what Leatherman has accomplished with this new tool, as it must have cost them a boatload to tool up and design each of the individual links. I also stonewashed the Tread in my rock tumbler to see how stainless the 17-4 stainless steel really was, and to break down the luster of the finish a bit. When it ships from the factory, the shiny links can be blinding to someone in the right light. 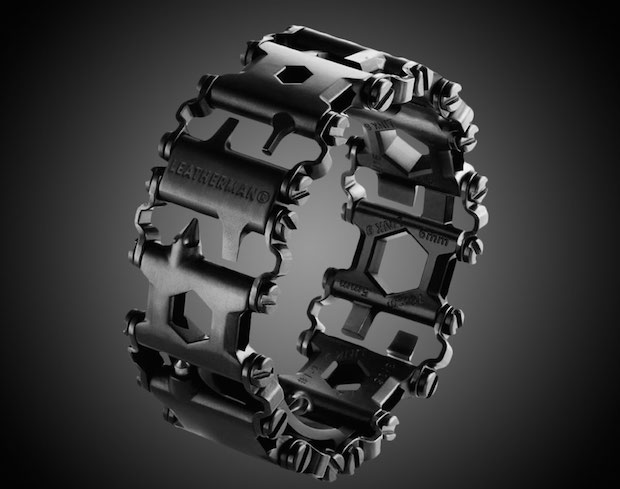 During the second week I finally had the opportunity to see the Tread shine. First, my iPhone decided to go for a swim and I needed to take the case off in order to remove the SIM card before the phone totally succumbed to liquid ruin. Without the Tread, it most certainly would not have survived its dip in the water. Later in the week, it proved its usefulness once again when I went for a swim near our place in Vermont. While on the dock, I noticed a screw sticking out of the side of the wood, and was able to screw it back into place using the Tread, quite possibly saving someone from having to get stitches in the process.
With it’s worth being established in two isolated incidents, the only concern I really had about the Tread was with the fact that some of the individual tools on the links protruded slightly when following the path around your wrist. I worried that they could potentially get snagged on clothes, the shoulder straps of a backpack, or even my toddler. Well, someone at Leatherman must have spent some time thinking about this too because when your wrist rolls the tools naturally tuck in more to avoid catching on other objects. I’m sure if you tried hard enough you could make it happen, but I now only see this as a concern in exaggerated circumstances.

In terms of durability, I came away quite impressed as well. Even though I didn’t officially test the Tread the same way I would a standard multitool, I’ve been beating on it significantly over the past few weeks, and have no reason to question the quality of its materials or build. You’ll have to take my word for it until you get your hands on a Tread of your own, but the intricate build of the links themselves, the hardware, and even the connecting links are damn near bulletproof. Additionally, I expected a bit of a learning curve when using it, but there really wasn’t one. You remember to treat the bracelet as a handle when you’re using it and you’ll be good to go. 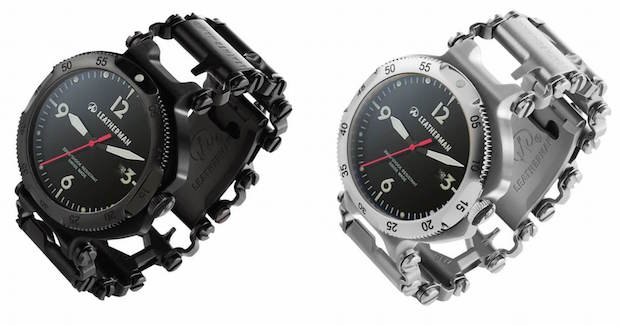 Will it replace a pocket multitool?
For me? No. I am an active person who is in multiple environments throughout the day and I find myself tinkering and fixing something all the time.

Will I actually use it?
I’m actually already using it a lot more than I thought I would. It’s great in a jam – especially if I’m in a situation where I don’t have my pocket multitool handy.

Is it worth the price?
Available in a Stainless Steel version for $165 and Black DLC coated version for $220, the Tread costs less than most outdoor watches and smart watches on the market today. In my mind, in both form and function the price is justified. Additionally, Leatherman has plans to release specific adapters for watches already on the market and even a watch face (QM1) of their the near future – making this beauty even more desirable. 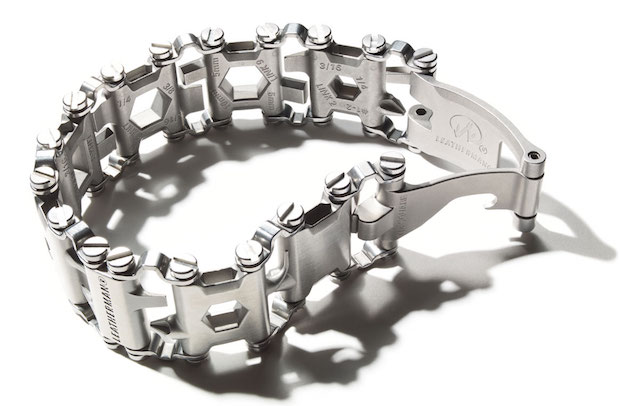 So what’s my final conclusion on the Leatherman Tread?
After almost four weeks of wearing the Leatherman Tread, I am head-over-heels impressed with it. I think it compliments my lifestyle and my pocket multitool exceedingly well. It is there when you need it in places where you might not have another multitool close at hand, such as the lake or when you’re in your boxers at 1 in the morning. I would even consider replacing my watch with the Tread+Watch combo when it’s released because I like the idea of always having something functional on me. I like being prepared and I also like knowing the time.

Ultimately, the people that will truly benefit from the Tread are folks who find themselves in places where traditional multitools aren’t typically allowed. This includes some public buildings and transportation, and of course airports. By creating this multi-function bracelet, Leatherman has solved the “preparedness” problem for those individuals. True, there isn’t a knife blade or a set of pliers on the Tread, but people in these situations will still find plenty of functionality to help fill the gap.

With the Tread, Leatherman has invented the first forward-thinking multitool on the market. Not only is it effective, but it’s awesome too. Kudos to them for having the foresight to deliver a product like this one.