Five Websites That Every Skier Should Bookmark

The next best thing to skiing everyday is using that off-snow time to plan another mountain adventure. We found a handful of great sites to help skiers make the most of their next ski outing. 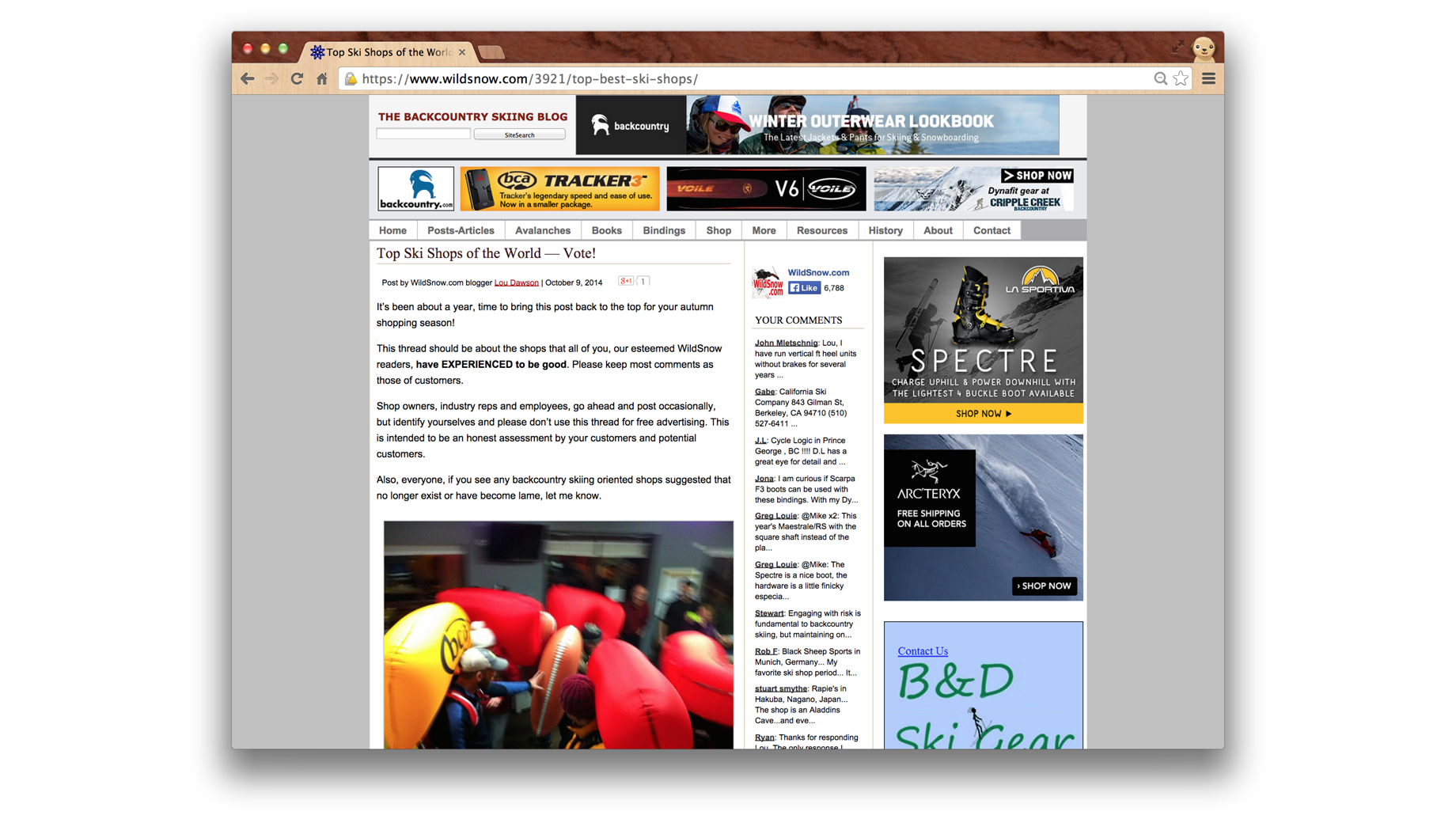 Ski mountaineer Lou Dawson started his blog, WildSnow.com, in 1997, and today it’s one of the most insightful websites in the backcountry ski community. Aspen, Colorado-based Dawson knows backcountry terrain: He wrote a best-selling guidebook after becoming the first person to ski all 54 of Colorado’s 14,000-foot peaks. And he knows the backcountry industry—you can often find him taking diligent notes at trade show press events. His blog (which admittedly, could use a 21st century design update) covers everything from gear reviews to trip reports to guest columns from other notable skiers.

Click here: If you’re looking for super techy gear reviews of the coolest new alpine touring bindings due out next year. 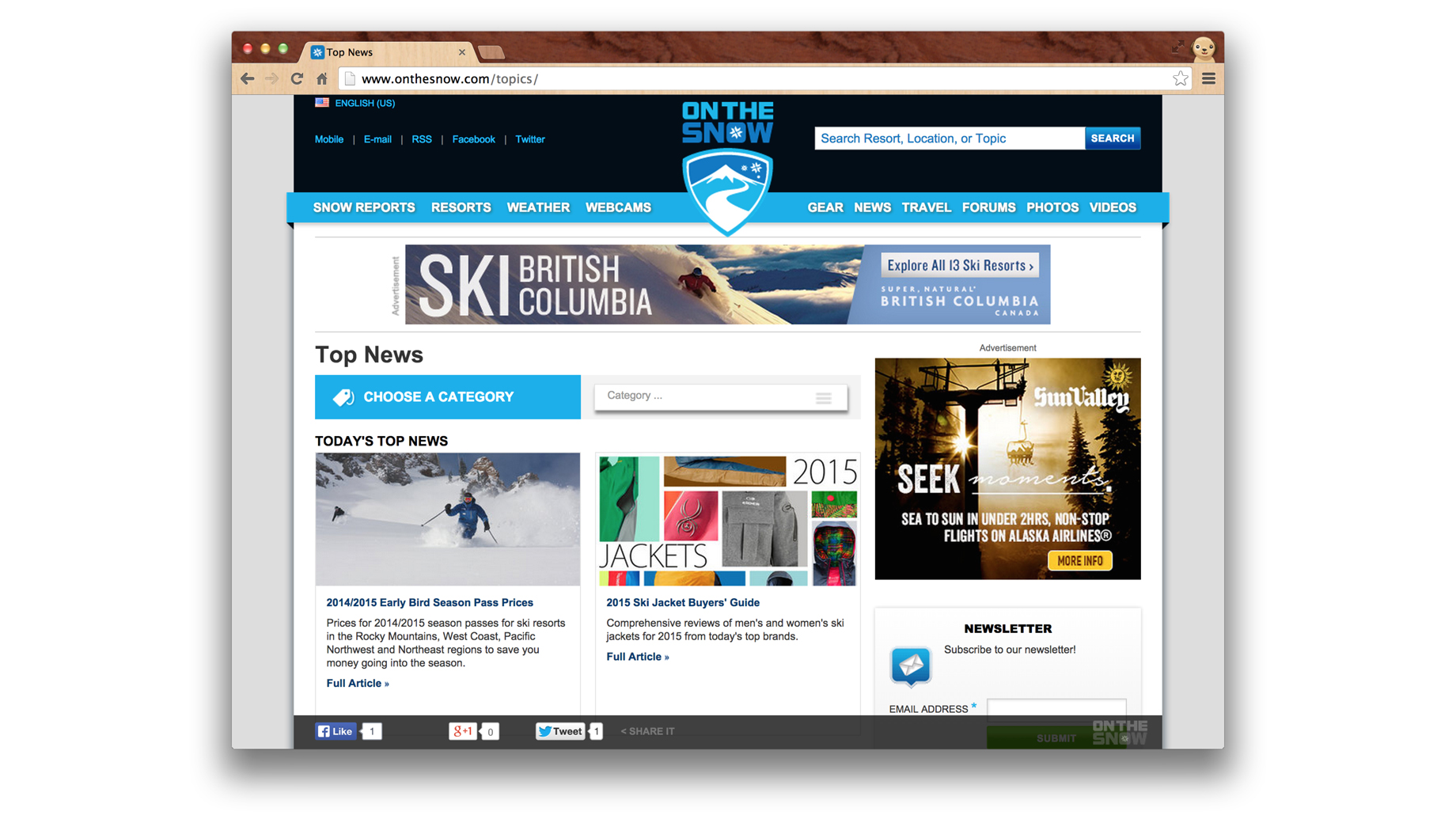 Sure, OnTheSnow.com has articles, gear reviews, and deals for booking your next ski vacation, but where this site really shines is its snow reports. Want to know which ski area near you got the most snowfall overnight? Or how about which resort in the country is getting the most powder right now? Yep, OnTheSnow has that info, easily organized and search-able. You can also sign up for a powder alert, which will send you a message when the resorts of your choosing get enough snow to wake up early for. Also check out the live web cams from resorts across the country, from Alta, Utah, to Whiteface, New York.

Click here: If you’re debating hitting the snooze button or waking up for first chair at your local resort. 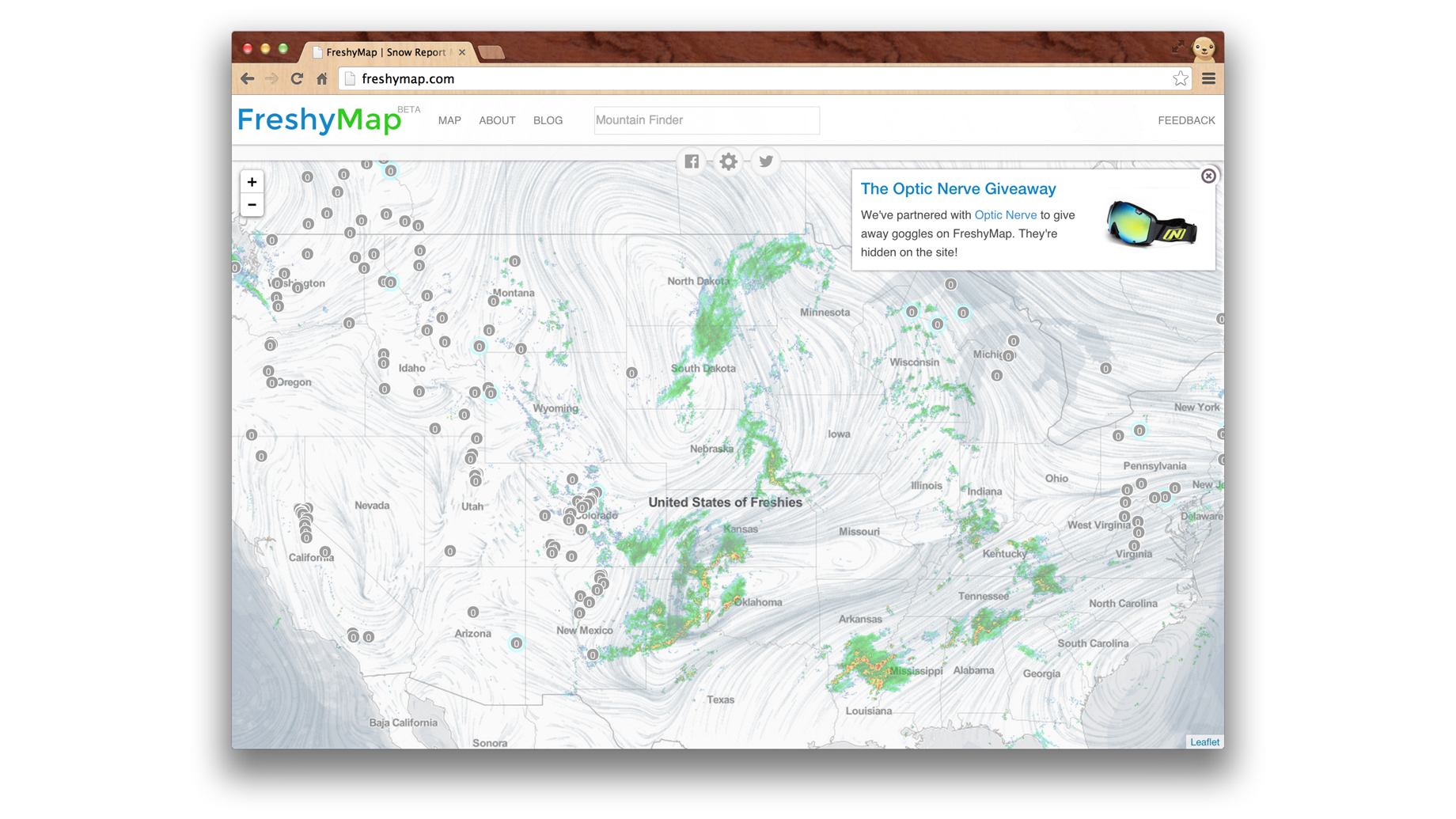 Launched recently by a team of powder-hunting skiers who moonlight as web developers, FreshyMap.com features a map of the United States of Freshies that shows in-depth snow forecasts and which resorts around the country are likely to get pounded. The tech nerds behind the site created their own algorithm, called the Freshy Factor, which determines the percentage likelihood of finding fresh snow at each resort. “It takes into account the amount of snow that’s fallen in the last 24 hours and the last five days, plus the day of the week, and the time of the day,” says FreshyMap co-founder Chris Helm. “It tries to convey that snow gets tracked out at different rates on Saturdays than it does on Mondays. Basically it attempts to address the shortcomings of most snow reporting apps.”

Click here: If you’re planning a ski trip and want to know, in advance, what region may have the most snow. 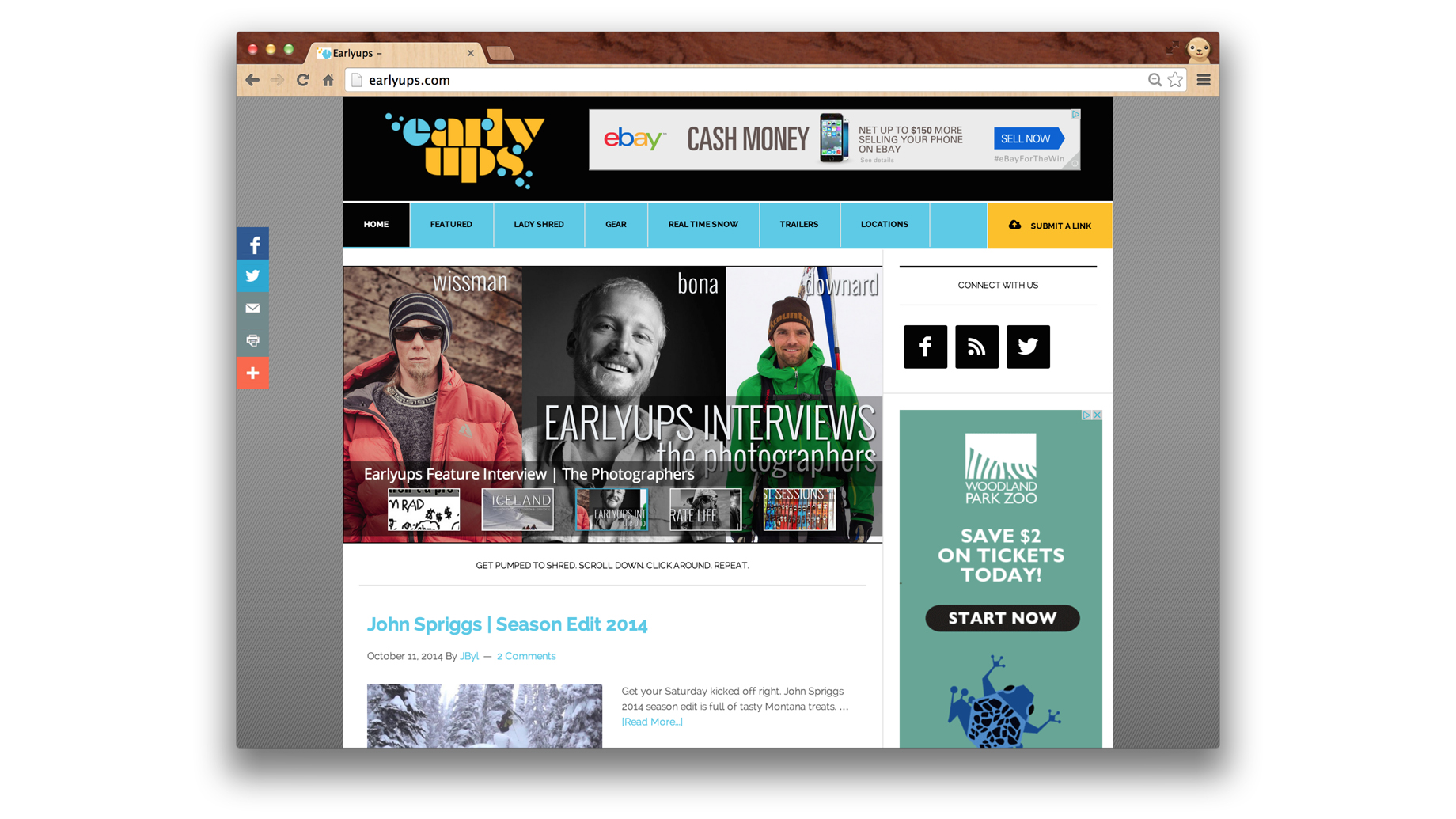 You don’t want to spend hours crawling the web for the latest news, videos and trends in skiing—you’d rather be out actually skiing. You can thank the guys at EarlyUps.com, which was founded a couple of years ago out of Jackson, Wyoming, who have taken to compiling and creating some of the best ski content on the web. You’ll find the latest ski movie trailers and viral ski videos, news from across the ski industry, athlete interviews, gear reviews, and more. The site is updated daily and is the perfect one-stop shop for everything skiers need to know now.

Click here: When you’re drinking your morning coffee and want to be entertained with a two-minute powder-in-your-face POV edit. 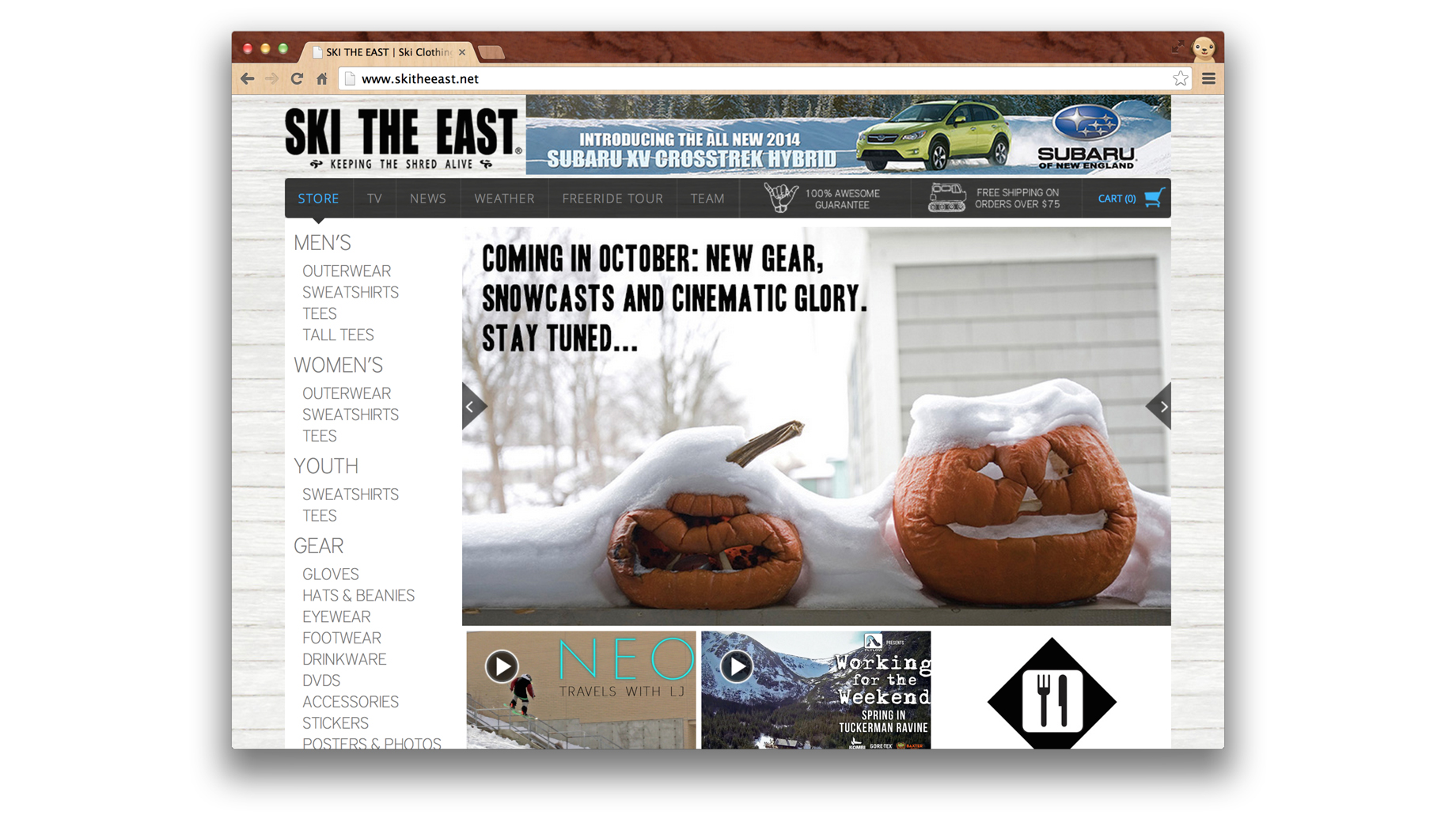 This site is a mash-up of a few different components—it’s the site of Meathead Films and the Ski the East Freeride Tour, it’s a retail store, and it’s a news and content site—but there’s one common thread: East Coast skiing. If you’re a skier anywhere from Maine to Virginia, this site has you covered and will get you pumped to go shred tight trees and powder from the latest Nor’easter. You’ll find new ski edits from Meathead Films, sweatshirts for sale emblazoned with the Ski the East logo, and the latest results from eastern big-mountain contests.

Click here: If you’re a skier from the East looking for stoke, information, and a community of like-minded shredders.