Climbing the famed but rarely visited “sea stacks” off the coast of northwestern Ireland, arguably the wildest region in the country known as the Wild Atlantic Way, trekking in to remote cliff tops overlooking 1000-foot descents where cold and beautiful seas crash the ancient coastline awash with wildlife and, on clear days, breathtaking views, is an experience you won’t soon forget.

And to check this off your outdoor-adventure bucket list, there’s only one person to call: Iain Miller, founder of Unique Ascents and holder of more first- and solo-ascents of the Irish sea stacks than anyone else. It’s his backyard and you want to climb with him. Martin Boner, Stephen “Jock” Read and Alan Tees are also famed contemporary sea stack climbers; and Irish climbers including Paul McDermott, Robbie Fenlon, Donnie O’Sullivan, Eddie Cooper, Raymond Dunlop, Niall Grimes, Al Millar, Howard Hebbelthwaite and Brian Callan all left their mark in the region throughout the 1980s and ‘90s. And according to Miller, there’s still a vast amount of unclimbed and undeveloped rock along the coast of Donegal County in addition to the more than 100 routes on a dozen sea cliff islands along the exposed coast. 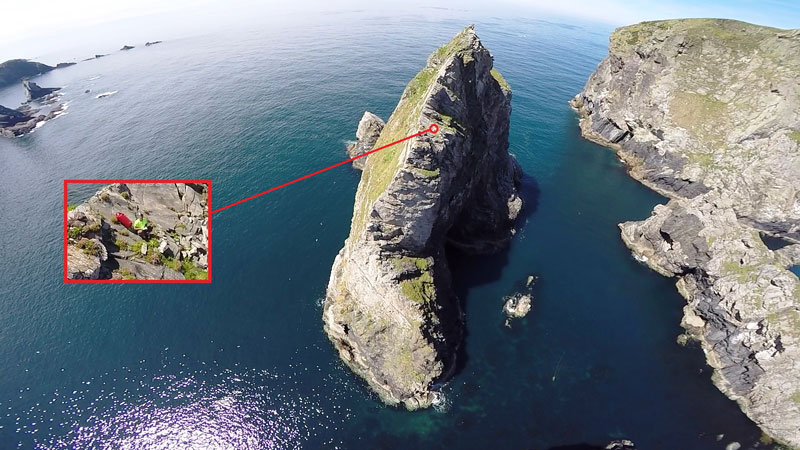 To get there, simply fly from Dublin to Donegal, and rent a car to take you up to the coast to rendezvous with your guides. The video above is the second ascent of Ireland’s highest sea stack where Miller notched a first ascent (FA) in 2009, and gives a good sense of the unspoiled beauty and vastness of the region. We got to climb with Miller back in 2014 while visiting the country to test a new line of Columbia Sportswear rain gear.

Some of the sea stack climbing is really hard, like with ratings up to E6, but there’s also a lot of really easy routes, like 5.8, you can do in hiking shoes. We recommend bringing your own personal gear (shoes, harness, helmet, etc.). The other really cool thing about climbing here is that it’s a true multi-sport experience…you have to paddle out in rafts to reach many of the routes, and in our case, we built a giant Tyrolean traverse to get back to the mainland.