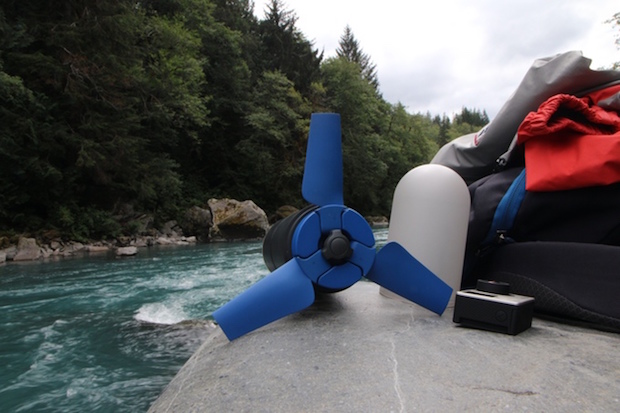 When it comes to generating power to recharge our mobile devices while traveling in the backcountry, solar energy seems to be the most popular option. But, solar panels can be wildly inefficient, and there are other ways to create energy while out in the wild that don’t involve the sun. For instance, a new product that has recently launched on Kickstarter harnesses energy that is created by running water instead, giving you what amounts to a portable hydroelectric generator that you can carry in your backpack.

The Estream is a bullet shaped device measuring 9.7 inches in length and about 2.5 inches in diameter. Along the top it features a small propeller like apparatus that includes three individual wings that serve as props. When not in use, those props can be folded down along the sides of the Estream to make it easier to carry and to protect them from harm. But when deployed and immersed in water, the current will cause those propellers to spin, creating energy through a small turbine engine located inside the product. That energy is then stored in a battery pack housed inside the device as well. 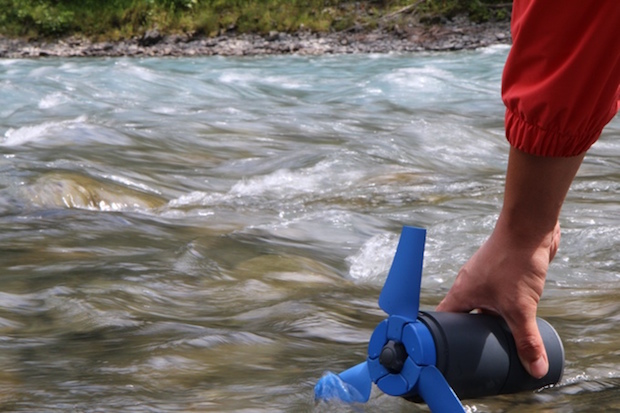 The designers of the Estream claim that it takes roughly 4.5 hours in the water to fully charge its 6400-mAh battery. That’s a faster rate than most solar panels are capable of, although the speed can vary depending on a variety of environmental factors. The device comes equipped with a USB port that can then be used to charge most devices, including smartphones, tablets, GoPro cameras, headlamps, and so on. A min-USB port on the Estream can also be used to charge the battery from a standard AC wall outlet before leaving home.

Deploying the Estream seems easy enough based on the instructions provided on the Kickstarter page. You simply bring the lightweight device to a stream or river, unfold the propellers and suspend the device in the water. That is done by attaching it to an included cable using a carabiner. The cable has a secure peg at one end, which is pushed into the ground under the water to hold the device in place as it floats. The water will then start to turn the propeller, lighting a blue LED that indicates the Estream is collecting a charge. That same light dims over time as the battery pack gets full. 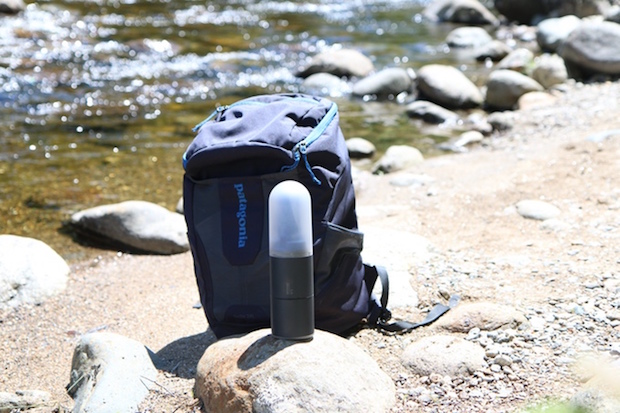 Other than worrying about the device floating away unexpectedly, it seems like a fairly straight forward and easy process. Leaving the Estream in water overnight should allow it to charge while you sleep, and provide plenty of power for your gadgets the following day. When it’s done charging, you simply retrieve it from the water, fold it back up, and go on your way.

The Estream is expected to begin shipping in January 2017 for $250. Kickstarter backers can get one for $180 if they order in advance. Enomad, the company behind the device hopes to raise $80,000 to get the Estream into production. As of this writing, they are about a third of the way towards that goal with a month to go until the campaign ends.

Find out more on the Estream’s Kickstarter page.