Enjoying crepes and climbs in the Alps with Salomon 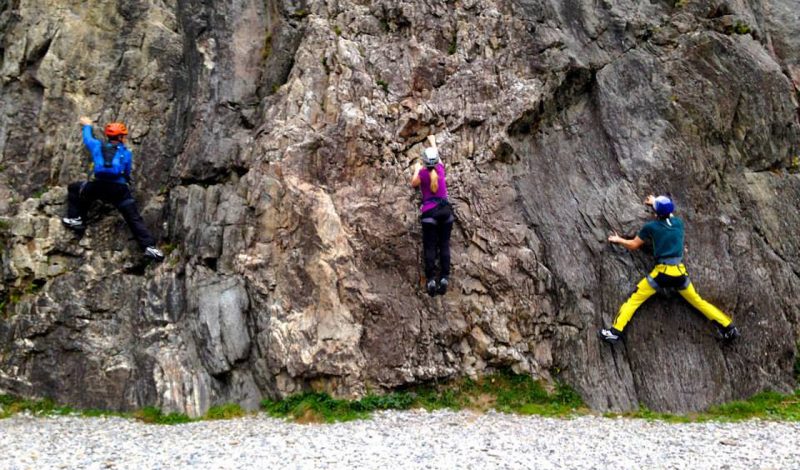 The offer sounded fantastic: I had a chance to have first-hand experience with the latest, greatest, high-tech mountaineering boots, packs, and jackets. But when traveling to France, priorities must be set. Great new gear can wait—the first things we needed to test in the Alps were the local crepes.

My colleagues, a collection of the top outdoor gear writers and retailers from across North America, expressed skepticism. But I have travelled in France enough to know that when you have just two days to enjoy the country, you eat crepes, cheese, and wine. Because in the immortal words of Vincent Vega, “it’s the little differences in Europe that make all the difference.” Oh and how my fellow journalists realized that wisdom after enjoying a few glass of Cotes-du-Rhone and a selection of sweet and savory that only tastes this good in France. 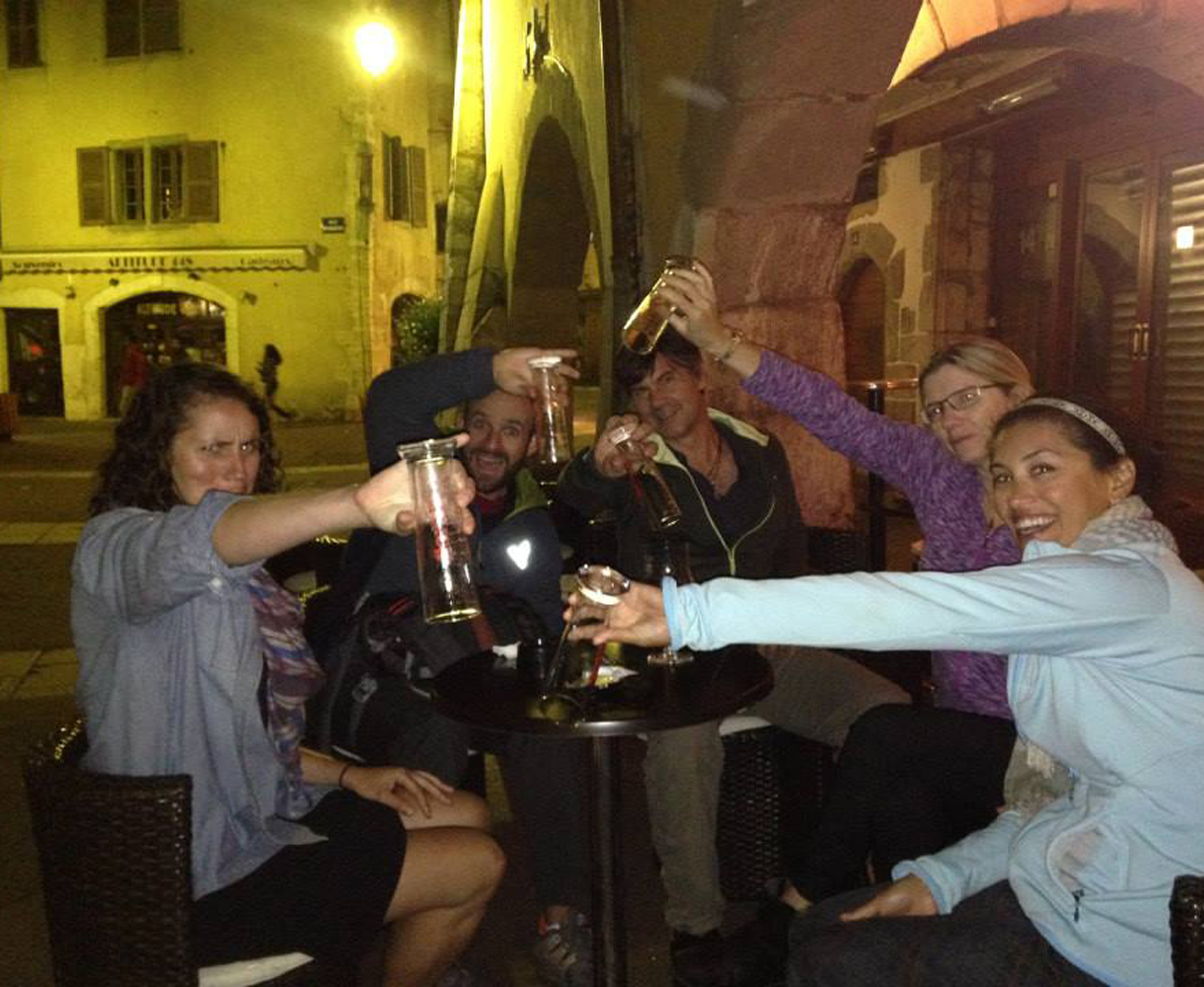 After noshing a few crepes, we got back to the gear. We had come here to Annecy to check out Salomon’s new S-Lab X Alp Carbon GTX, a mountaineering shoe that rings true to those little differences you discover in Europe. 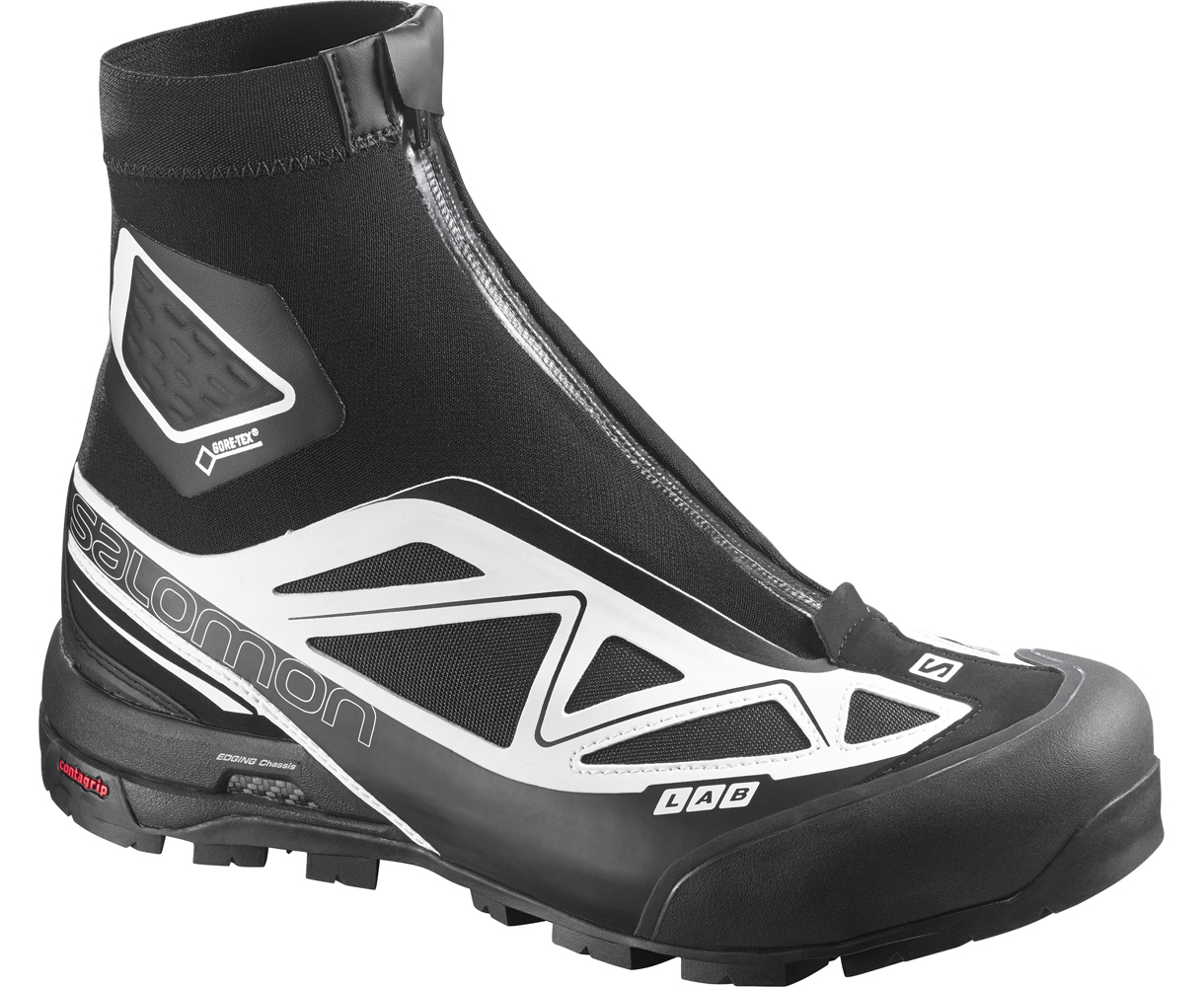 The boot was designed with European style touring in mind—Salomon’s plan was to design one shoe that would be comfortable enough for the approach hike, stiff enough to hold a crampon from some glacier travel, and technical enough to climb low level alpine routes. That is exactly the type of touring that happens in the Alps where big ascents on icy peaks are usually within walking range of those aforementioned crepes. The usual drill for these types of jaunts is to hike in and carry a pair of mountaineering boots. That can be a heavy pain, and requires stopping to switch shoes. No longer.

Retailing at $300 and weighing in at just 500 grams (17.64 ounces) in a U.S. size 9, the boot features a carbon fiber edging chassis underfoot. This light, strong foundation is sandwiched by two layers of compressed EVA in the midsole, a Gore-Tex membrane and a Contragrip outsole. The carbon chassis offers up lots of mobility when rolling through a step while also providing lots of lateral stability. That backbone provides the shoe’s key trait—the ability to hold a crampon as well as edge on rock climbing moves. Add in an integrated bootie and waterproof zipper and you have a shoe that might look like it walked out of a French sci-fi flick but in reality it easily withstands heavy use in the mountains. 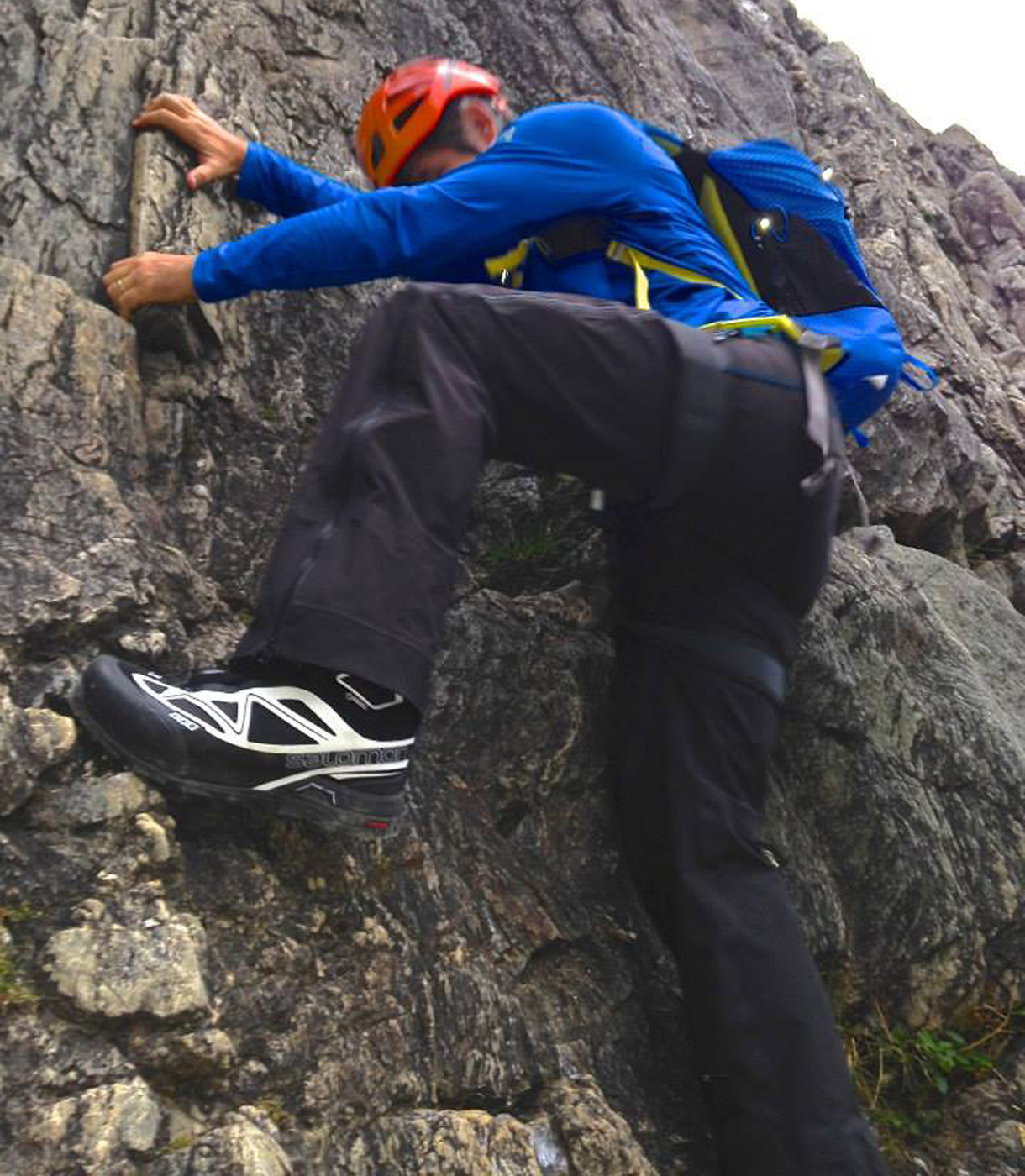 That futuristic reference is not too far off. The boot was developed in Salomon’s S Lab, a facility that incorporates a rash of high-tech machines that go ‘bing’ (as well as test grip, stretch, durability, fit, and material strength). We got a chance to tour the S Lab, where the manufacturer’s designers showed us exactly how they think through the products they produce before they put it out for field testing with Salomon athletes, including the likes of ultra-running beast Kilian Journet and late extreme skier Andeas Frannson, who sadly passed in an avalanche in South America while we were on this trip.

The lab highlight was a wet-slope testing ramp that provided designers with data on just how much traction a sole provides on wet rock at differing inclines—and was a lot of fun to play on, running up until we slipped off.

Salomon is based in the lovely town of Annecy just a short drive away from Chamonix, that famed epicenter of all things extreme, so we had the perfect chance to really give these shoes a solid test. The consensus? The X Alp Carbon delivered. We slipped them on and went for a walk through town to the local crag, where rumor has it that the first English mountaineers who braved these peaks in the late 19th and early 20th century worked on their rope skills. Unlike most mountaineering boots, which feel quite bulky and technical, the X Alp made for a surprisingly comfortable in-town walk. At the crag, we roped up and gave the shoes a real run for their money. Voila! They edged exceptionally well on low class 5 climbing. Smearing was not as stable but good enough that we played around bouldering on the rock. But the shoes aren’t really meant for technical ice and/or mixed climbing so we probably pushed them bit further on rock than Salomon intends them to go. 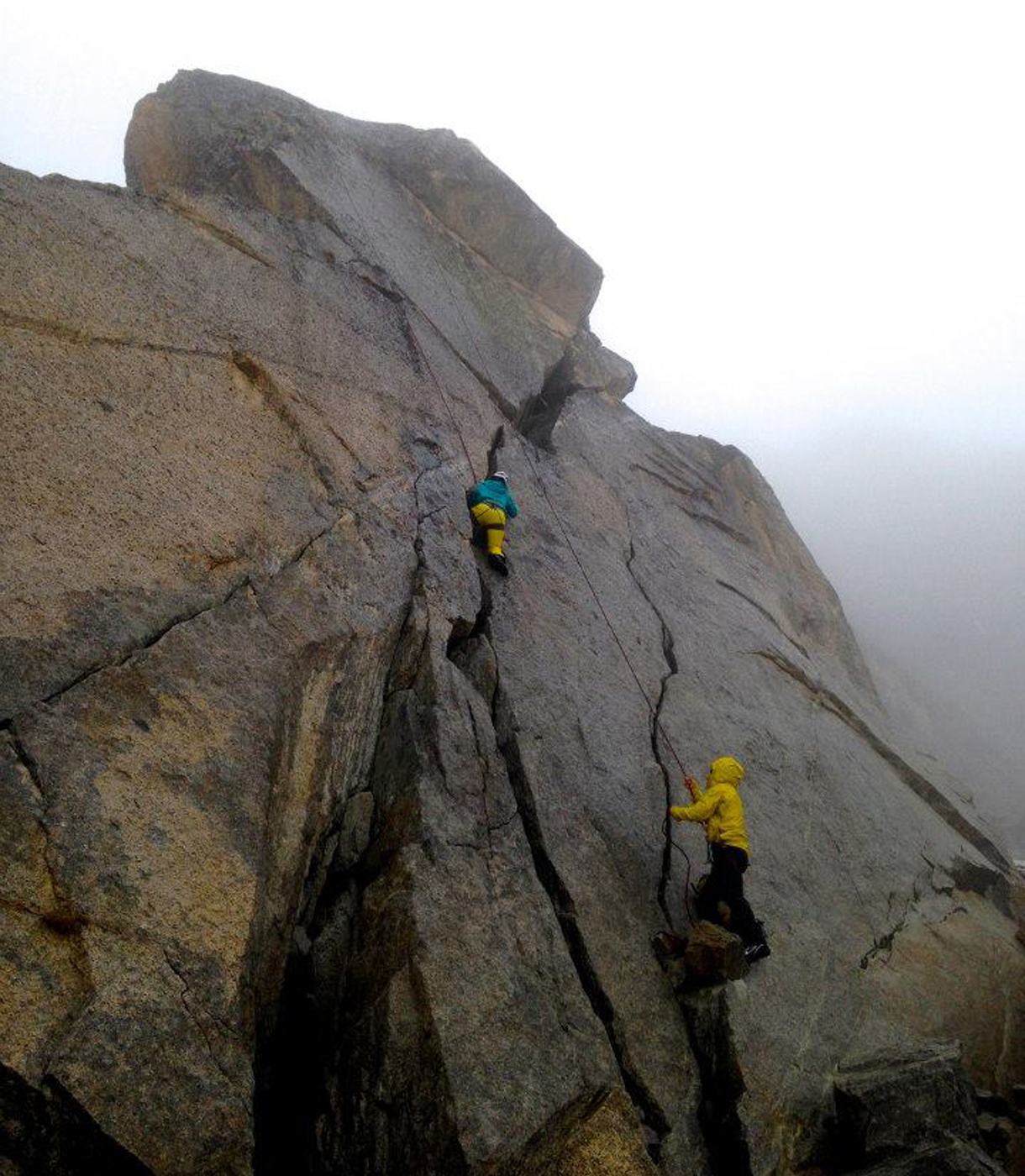 The next day we headed up into the mountains with local guides to really give the boots a once over in wild terrain. Again they were shockingly stable for such light shoes. We put on crampons and played on a snowfield and then roped up again for a short alpine climb with a tricky off width crack move and lots of smearing on bare rock. And it was raining. In short, we were quite impressed. The boot performed exactly as advertised, light and comfortable enough for long hikes but beefy enough for technical enough for mountaineering. 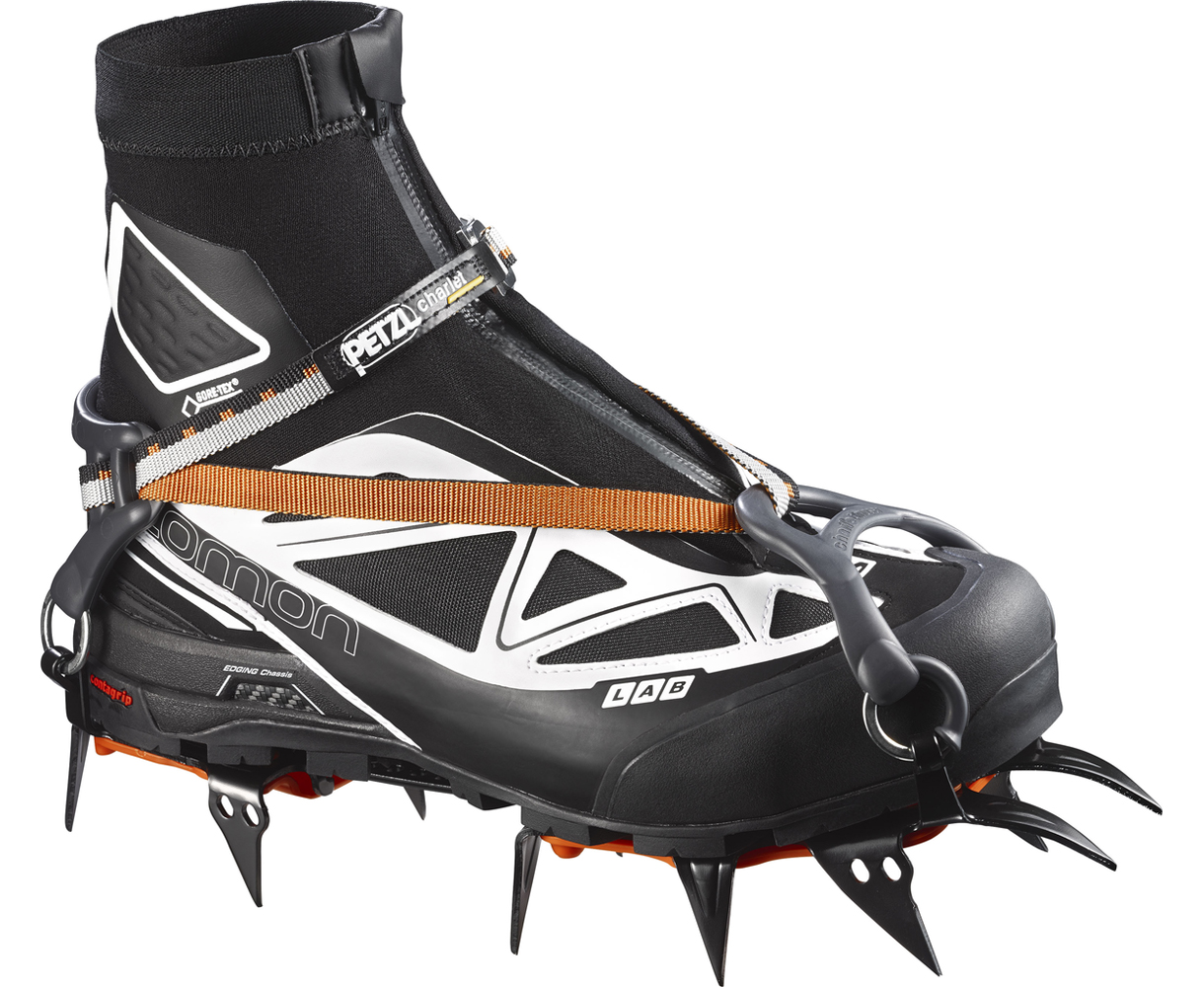 One downside we noted focused on the look and style of the shoe. The aesthetics are a bit over the top for those of us in the states who like to be more understated outdoors than our Gallic counterparts. Also, we wondered what exactly the market might be in the U.S. The boots are ideal for more casual users in the Alps, where these types of adventures are more commonplace, but maybe less useful here in the U.S. where fewer casual customers will embark on hike-and-glacier trips outside of the Cascades or maybe the Tetons and Colorado. But the shoe we tested is the top-end model, intended more for guides and professionals. Salomon is also introducing less technical models. The X Alp MTN GTX for example (which looks less space age) weights just 2 ounces more and features laces instead of the waterproof bootie, but retails at $250.

Those are just very small quibbles however. This is one impressive boot that makes mountaineering easier for anyone who slips it on. And of course, it passed the true test. After climbing in rain out on the vertigo-inducing walls and snowfields of Chamonix, we made sure to remember what makes Europe so different. We hiked to a hut looking down on the town and tucked in to a full French meal, topped off with a dessert buffet. I forgot I was even wearing mountaineering boots. 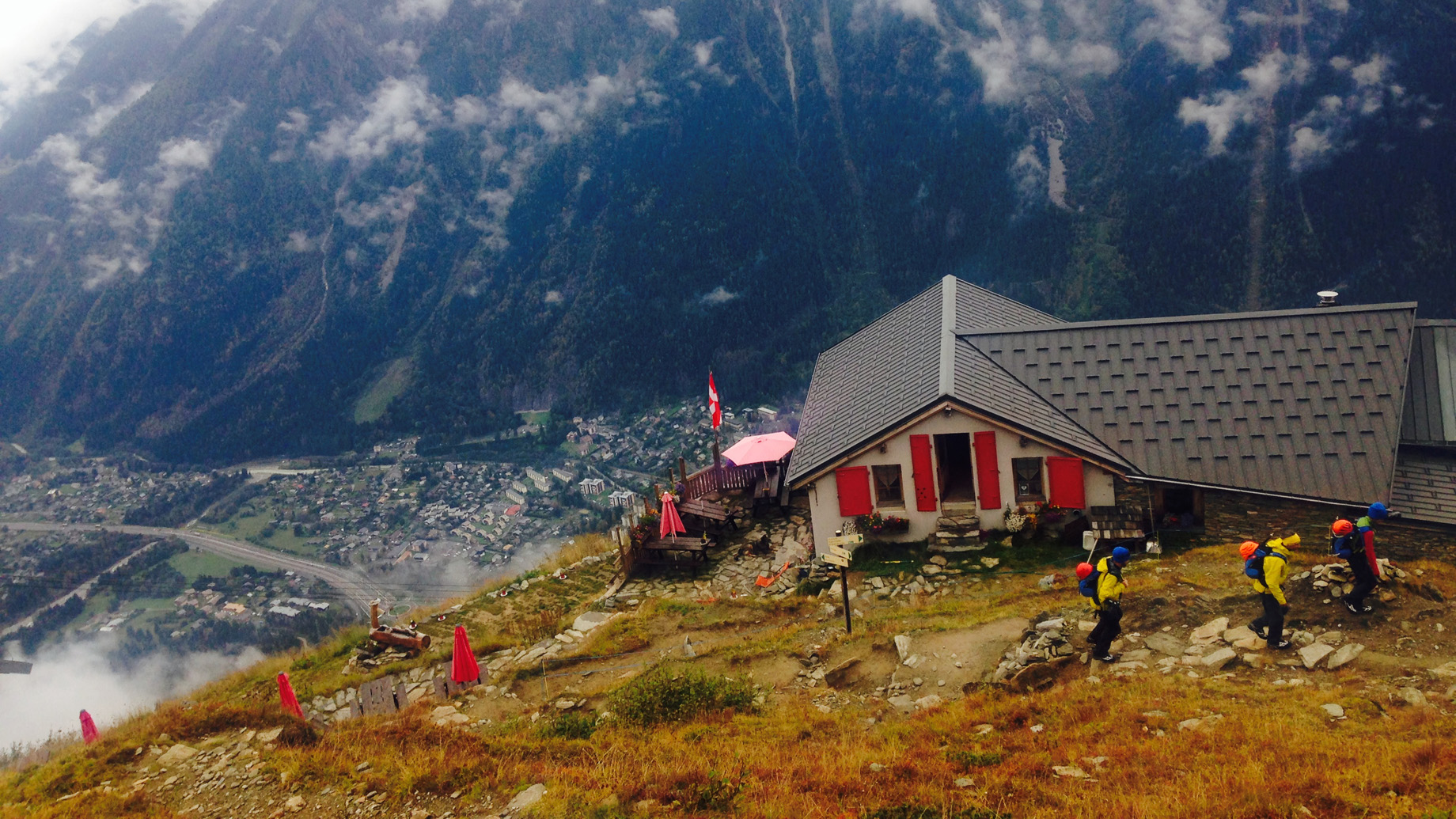