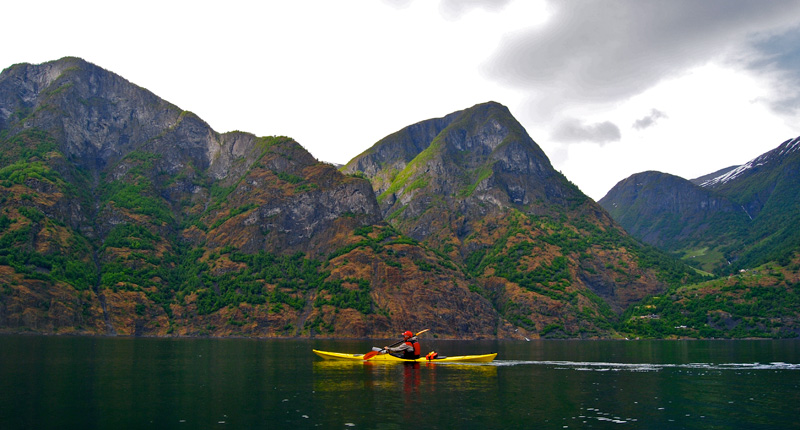 Sea kayaking through Norway’s fjords is like finding yourself in Middle Earth, with green, impossibly high cliffs, towering waterfalls and Viking burial mounds all piled up in stone only increasing the sense of magic that permeates the wet, misting air.

“You don’t have to reach and pull so hard,” Todd Walton tells me from the stern of our kayak. “It’s more a Zen thing. The paddles are all well-enough designed to do the work for you.”

Walton is the founder of the Walton Works, the public relations firm that has brought me to Europe to test packs for his client, Deuter. In cooperation with Fjord Norway, Evolv shoes, and some sleeping bags and pads from Big Agnes, Walton has planned an incredibly experiential adventure, ranging from ocean to mountain to river to rock climbing. We won’t visit a single factory, or view a single PowerPoint presentation. But we will come to rely on the products, and fall in love with the country, and build bonds with half a dozen people we never knew before.

“You can also keep your hands lower, and think about punching forward toward the horizon with the hand that isn’t in the water,” Walton adds.

An experienced kayaker, I’m glad he’s steering our boat. My buddy Mike Horn, who writes for Backcountry and Kronicle and co-founded Stoke Lab, has as much kayak experience as I do (i.e., none), and is in a tandem with our expatriate American guide Ervin Mejia of Njord Kayak. Before we left, we sent this Am/Ex video to each other. It becomes a running joke.

“Yeah, check me out in the rapids,” says Horn.

For the rest of our group, gear tester extraordinaire Frederick Reimers worked as a river guide and grew up on the water. Sean McCoy from Gear Junkie and Brendan Leonard from Semi-Rad and the Adventure Journal are also happy in their own rigs. And our new best Norwegian friend Andreas Skogseth and his photographer friend “Stoller,” seem to cruise or drift at will.

“We’re going to stop at the village up ahead for some goat cheese and cider,” Ervin tells us as the rain starts coming down, and a tour ship goes by filled with people waving at us from the deck and taking our picture as if we were some animals they saw in the wild. “You might want to stay clear of all of that snowmelt pouring through the river near the shore.” 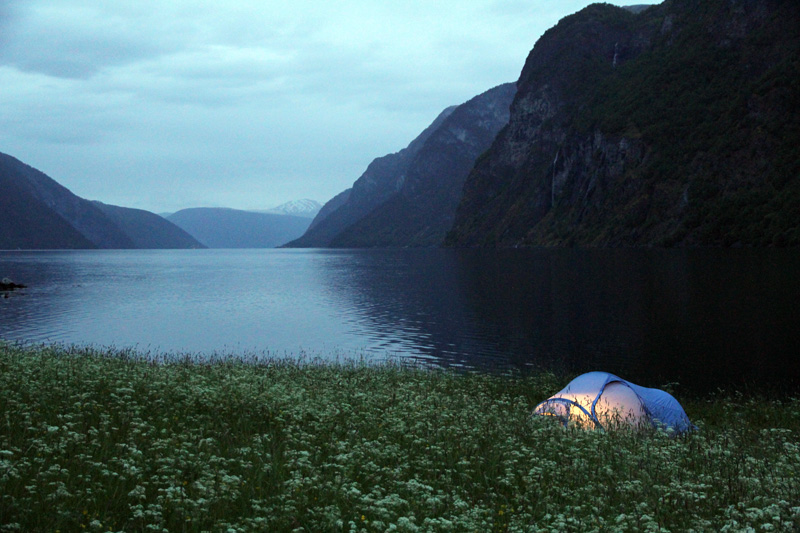 A Sense of Place

I notice that when I go to new places, I try to find a kind of shorthand to explain them, some generalization or experience that I can start to build into a rule. But the Norwegians evade that easy classification of say, talking about Italians and food, Germans and ingenuity, or Brits and beer.

“It’s because we’re practical people,” Andreas explains, meaning that they don’t exacerbate their extremes like many Americans do, flouting their polar opposites, politicizing whether they eat vegetarian or McDonald’s, or support fossil or renewable fuel. “We tend to look at all of the angles, and think things through.”

“We’re not afraid of the silence,” he says in summation. In such a naturally beautiful place, it seems easy for the need for words to disappear.

I wonder if that is why there is such a strong sense of mythology here, in magic and trolls and the huldra, the blonde-haired, long-tailed, mountain temptress who sings the shepherd boys off to her alpine lair.

In the Tyssedal Hotel, where a Via Ferrata now climbs up sheer rock faces past the same hoses and rusting machinery that first fueled a messy, mini industrial boom for the former resort town, there is a giant painting of two trolls looking down at the hydro plant that those hoses once fueled in the valley below. It is an insightful glimpse into the duality of Norway’s myths, commenting as it does on how nature watches and worries over the silly things that humans do.

“It is artistic license,” says the hotel manager, who then seats us for a lunch of fresh Norwegian lake trout and beer. 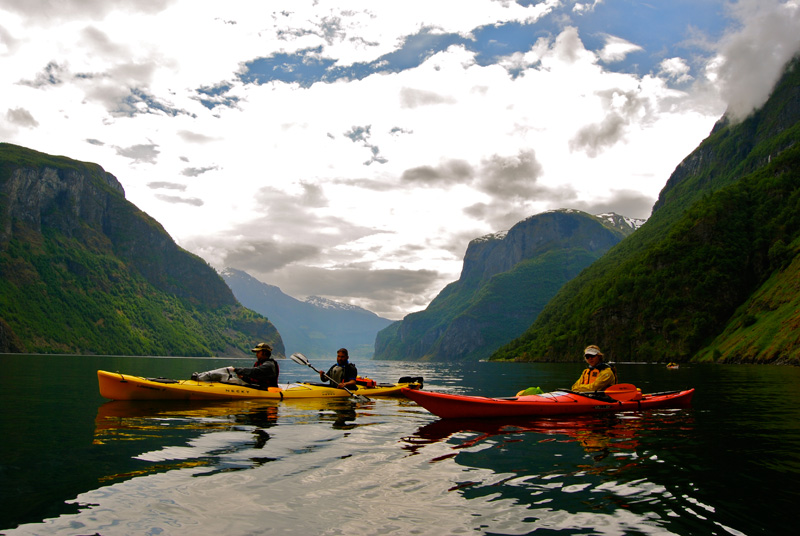 Over the course of a week, we board historic trains and ride a wild river where the cold rapids hit our faces like icicles and we name one drop “Mayhem” for how it pitches us all into the center of the boat. We drink Acquavit that clouds our minds in a kind of medicinal haze, and watch busloads of Asian tourists buy troll dolls and plastic Viking helmets that were probably made in factories back home. We eat salmon and reindeer and steak, and in the waterside town of Utne, we stay in a hotel that first opened in 1722.

We go for a breathtaking all-day hike on the Aurlandsdalen trail that takes us through small mountain farms, up over the treeline, down through a jagged canyon, through green, almost tropical steppes, and along a river that seems to explode with views. We drink wheat beer and IPA at the Aegir Brewery. And back in the big city of Bergen, we eat fresh halibut and drink white wine at a restaurant in the harbor, trying out the stories that we will start to tell for years.

“This was more like a holiday than it was like work for me,” Andreas says, raising his glass for a toast.