Best Websites for Climbers of Any Caliber 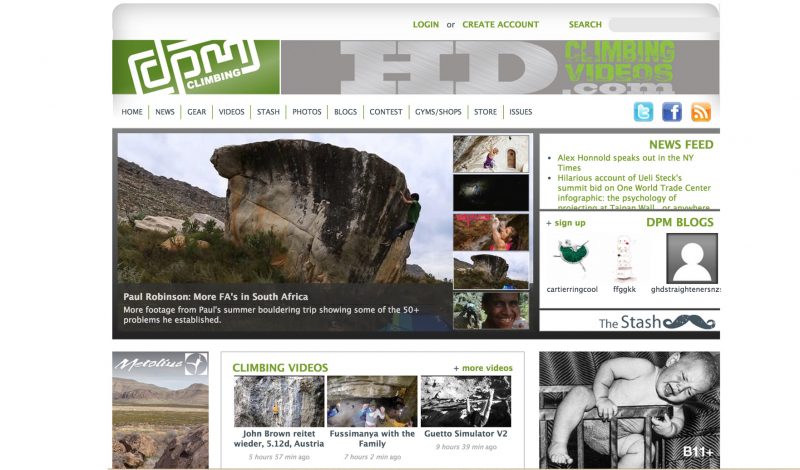 From philosophical essays to gear reviews, the websites listed below offer something for every climber. 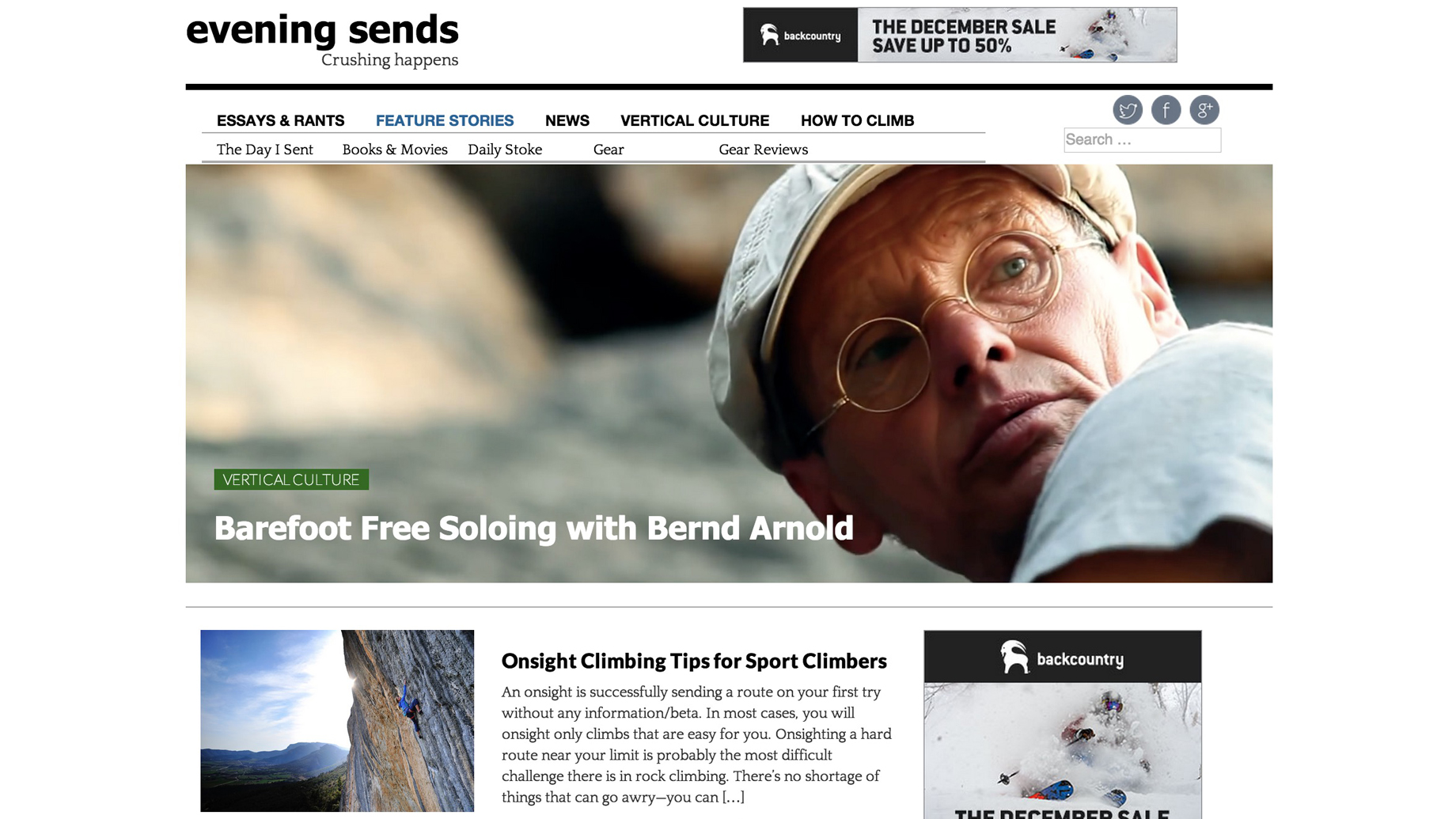 Former Rock & Ice editor Andrew Bisharat started EveningSends.com in 2006 as his own personal blog. But in the last year, it’s become more of a climber’s journal, a place for Bisharat and other contributors to wax poetic on climbing culture. The site includes hotly debated opinions, long-form essays, humorous rants, travel stories, and more. Pro climbers like Tommy Caldwell, Daniel Woods and Paige Claassen are now contributors to the site, as well as other writers. “I’m trying to push authors (as well as myself) to really try to articulate what makes climbing so meaningful to us,” Bisharat says.

Click this site: For a literary immersion into climbing culture. Be prepared to spend an hour reading long-form stories. 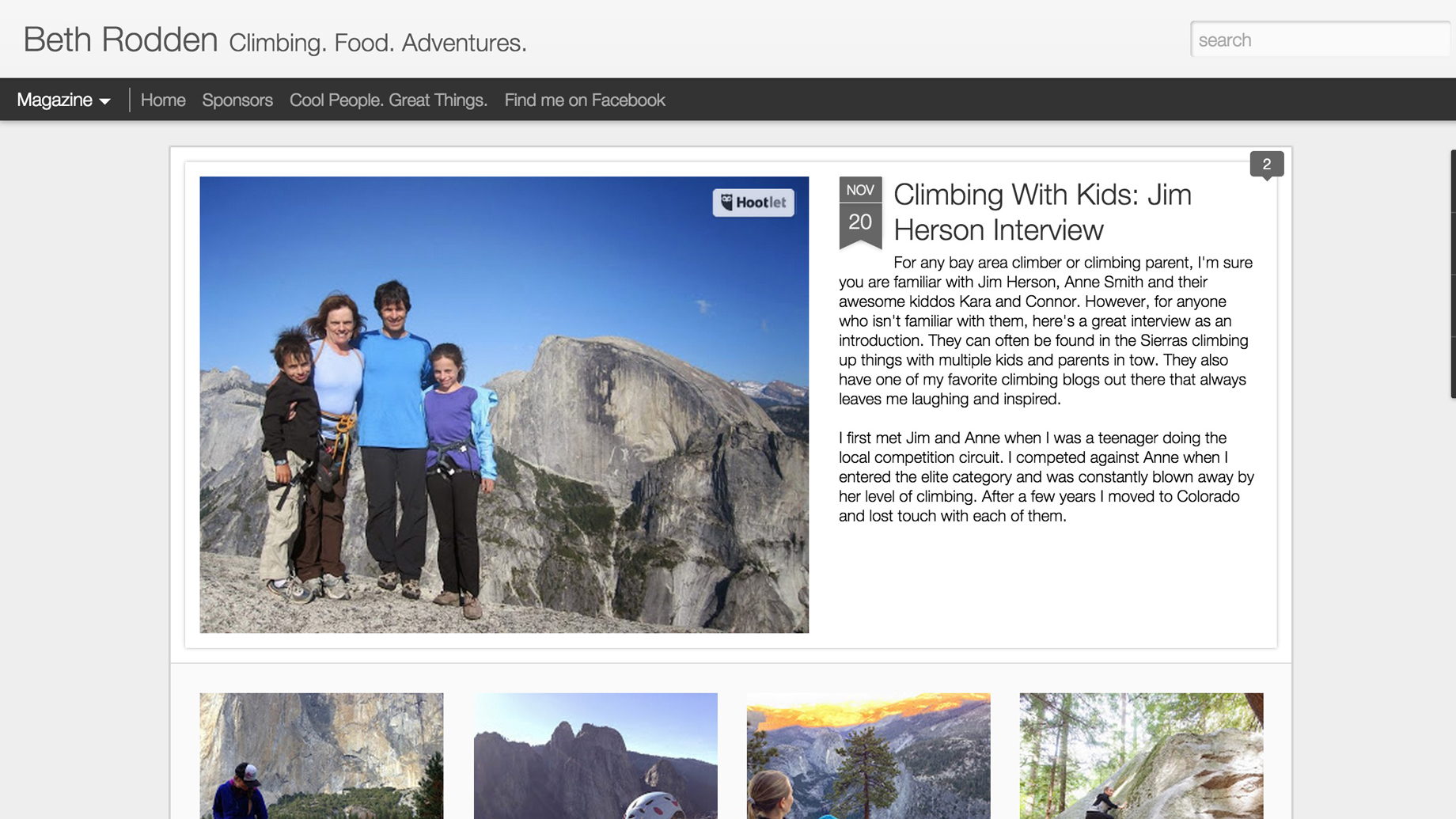 One of the best female climbers in the world, Beth Rodden made waves in the last year by dedicating her blog to a new subject: climbing while pregnant. “When I first found out I was pregnant, I did a ton of research to see what other climbers experienced, and didn’t find a lot out there,” Rodden writes. “I want to help change this in the climbing community, to help make it an open discussion.” Since giving birth to her son, she’s now switched gears to covering climbing with kids. She shares her own experiences and interviews other women and men in the climbing community for their take. Her writing is honest, raw, and gives a rare insight into the mind of a female climber.

Click this site: If you’re a woman climber. Period. Men will appreciate Rodden’s words, too. 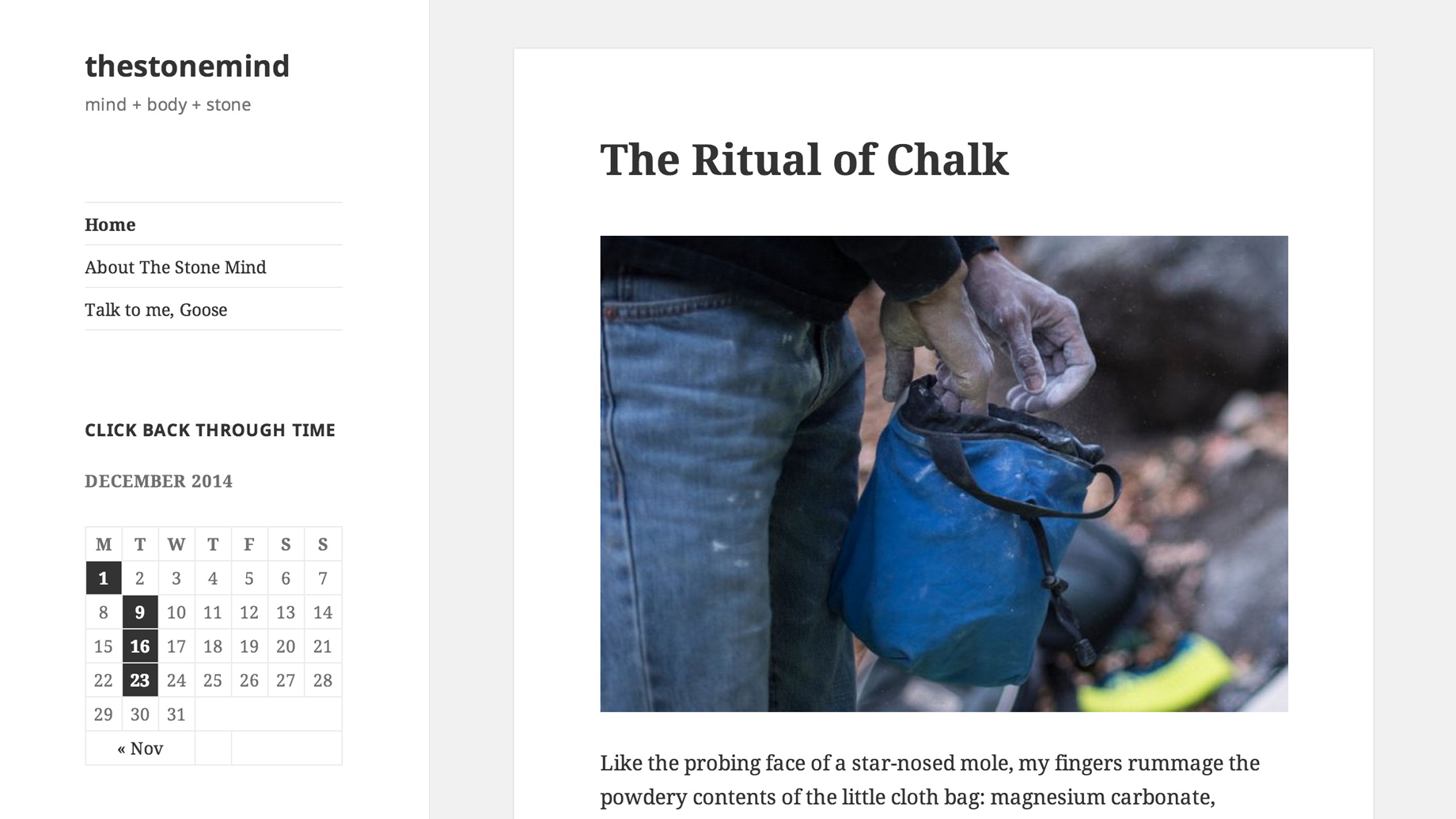 Justin Roth, a former editor at Climbing and Urban Climber and now the Utah-based communications guy for Petzl, runs this philosophical blog, thestonemind.com, named after a Zen Buddhism reference. He writes about everything from the symptoms of climbing deprivation to the value of a good climb. “It’s hard to pin a value on climbing. Like art, it has no clear purpose. Like a poem, a route is open for interpretation,” he writes. “How much would you pay for a perfect fall weekend in the Gunks? How would you even express it?” It’s a little abstract at times, but so is climbing.

Click this site: For short, almost mythical musings on climbing and its many tangible and intangible elements.

Site of the Future: Island.io 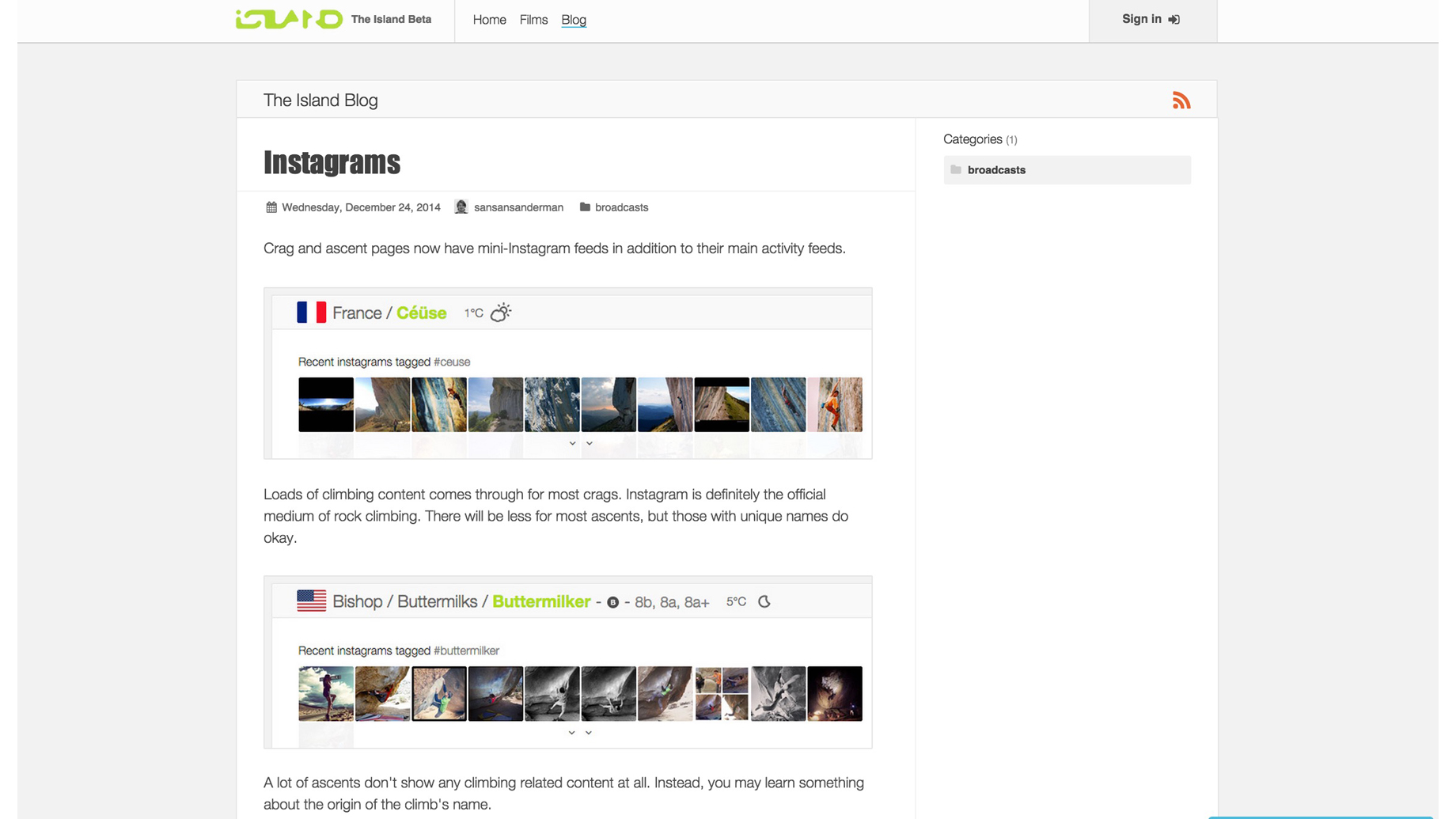 Island.io was started by Dave Graham, one of the best climbers in the world, and today it’s a collaborative effort from Graham and other top climbers. The content—which is mainly visual in nature, from high-quality videos to photos, and all streamlined and simple—is sourced from people on the ground, all over the world, from Colorado to Finland, all of which makes up this fantasy climber world known as “The Island.” Here you’ll find movie trailers for the latest climbing films, trip reports, and a digital map that climbers can post images to from the field using Instagram.

Click this site: To connect with other climbers on the ground and to see what the sports’ best are up to. 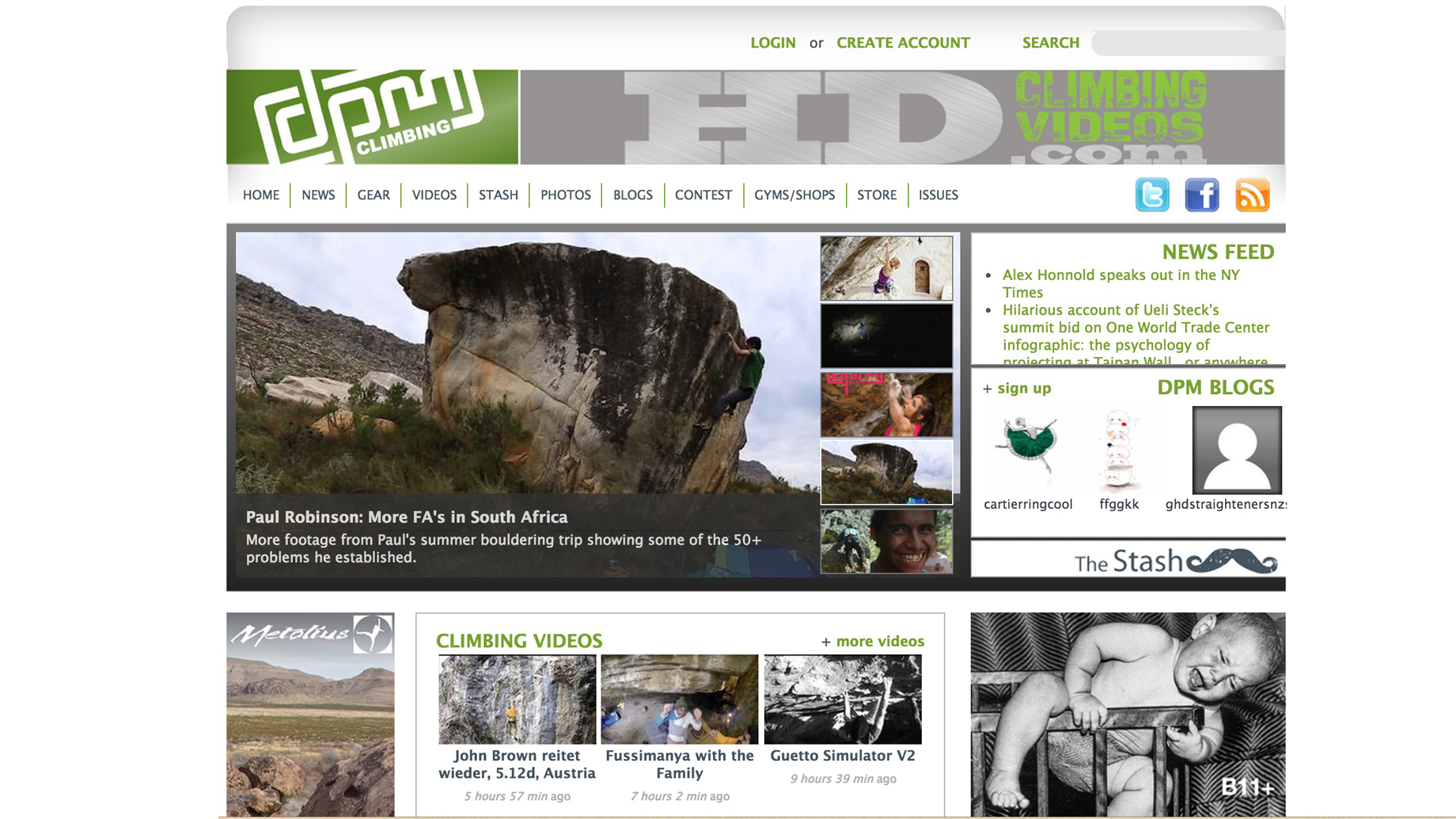 The website for the print magazine Dead Point, which is published six times a year, is chock full of good content on climbing and bouldering. You’ll get the latest Chris Sharma and Alex Honnold videos, plus surprisingly good user-updated edits from the Sierra to Switzerland. You’ll also find articles on the latest first ascents, profiles of interesting characters in the climbing community, and tips on injury prevention. Unlike some magazine websites, this one actually has tons of quality bonus material you won’t find in print.

Click this site: For quick, easy-to-watch climbing videos that will transport you to another place.