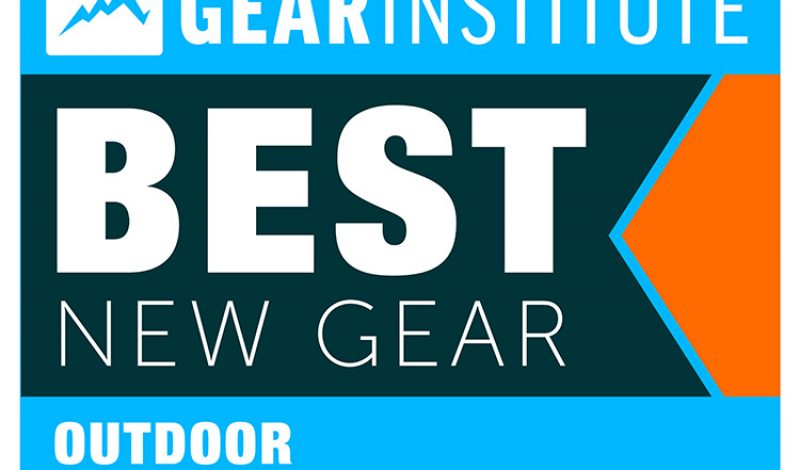 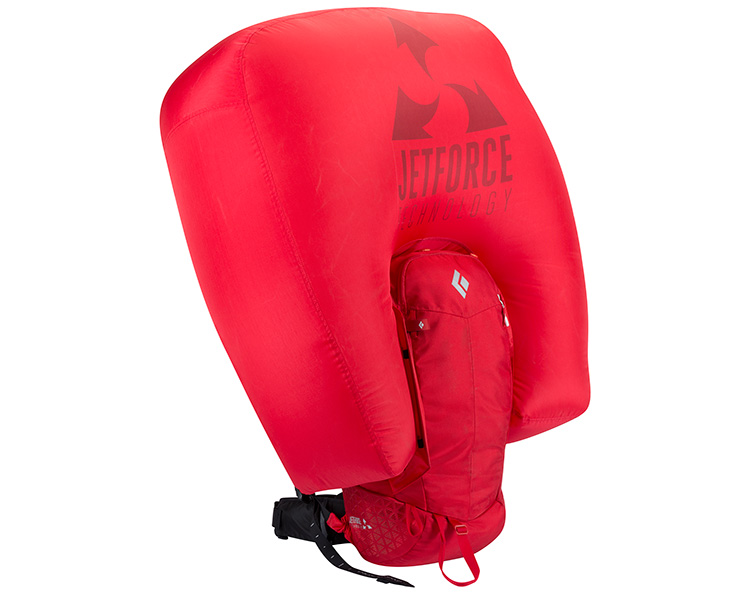 Black Diamond is introducing an avalanche airbag that should blow all other airbags away. The Halo 28 is full of firsts—the first jet-powered airbag, the first airbag to allow multiple deployments during the same outing, the first to do repeated inflations during each deployment, the first airline-friendly bag, and the first with a self-diagnostic monitoring system. All other avy airbags inflate with a canister of compressed air or nitrogen and are then out of commission until the canister can be refilled. BD’s Halo 28 blows up with a high-power fan driven by a rechargeable lithium ion battery—you can deploy the bag up to six times on one battery charge, then recharge it in a few hours. That means you can test the bag out at the trailhead, and you’re not hosed if you panic and pull the chord for a minor slough.

Even better, the bag does a self-diagnostic test when you power it up—a series of beeps and lights lets you know the system is ready to fire, so you don’t have to cross your fingers and hope the system will work when you need it. When you do pull the chord, the fan keeps re-inflating the bag every 30 seconds for three minutes—which should keep it inflated even if the bag has been punctured in a slide—then reverses direction and sucks the air out, so if you have been buried, you have a nice air hole. And it’s TSA approved. Sweet. $1,100. 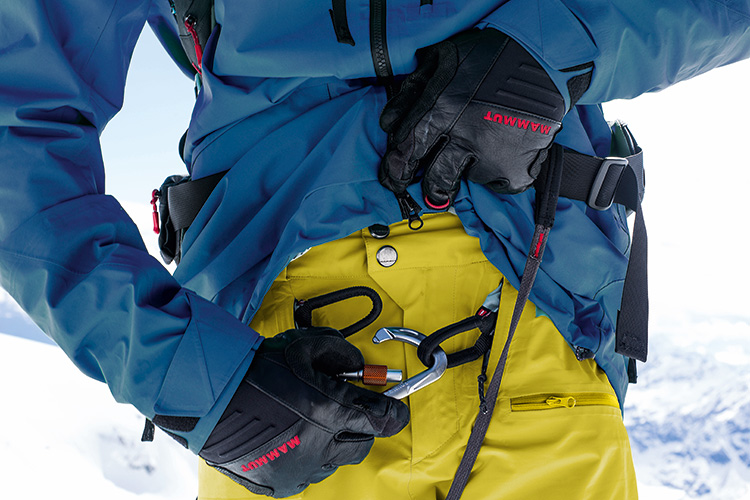 For those who ski close to the edge, Mammut has developed a pair of snow pants that integrate a climbing harness into the pant itself—no more stopping at the top of a rappel to slip one on, or worrying that you left it back the truck. Built with Gore-Tex’s top-shelf Pro fabric, the Alyeska has five pockets, adjustable suspenders, side ventilation, and all the other features you’d expect in a high-end pant. Plus, it’s just nice to know you’re always ready for a rap or a hoist. It’s like an insurance policy. In your pants. 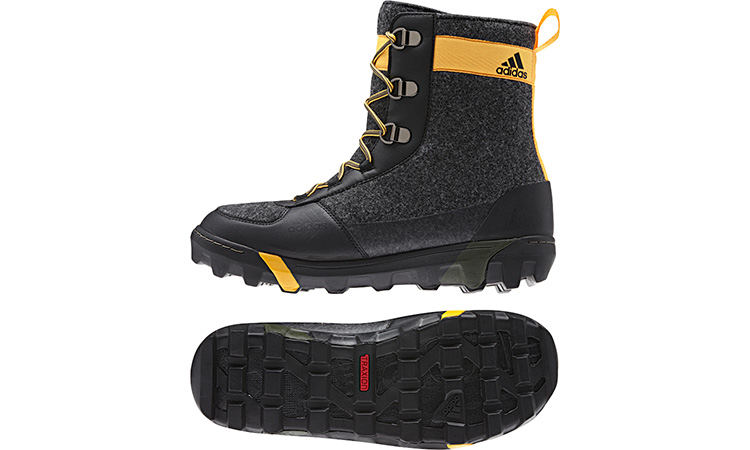 In a market of mostly interchangeable winter boot designs, the Adidas Outdoor Felt Boot stands apart from the crowd. Crafted from water-resistant Italian felt, with PrimaLoft insulation and a high-traction, toothy rubber outsole, it blends a classic look with euro-sport style in way that breaks the molds of both the tech and apres boot, and is one of the few designs at the show that feels like it has one foot in the future without forgetting its classical roots. Best paired with a Porsche Cayenne and a lodge in Aspen (or Chamonix). $130. 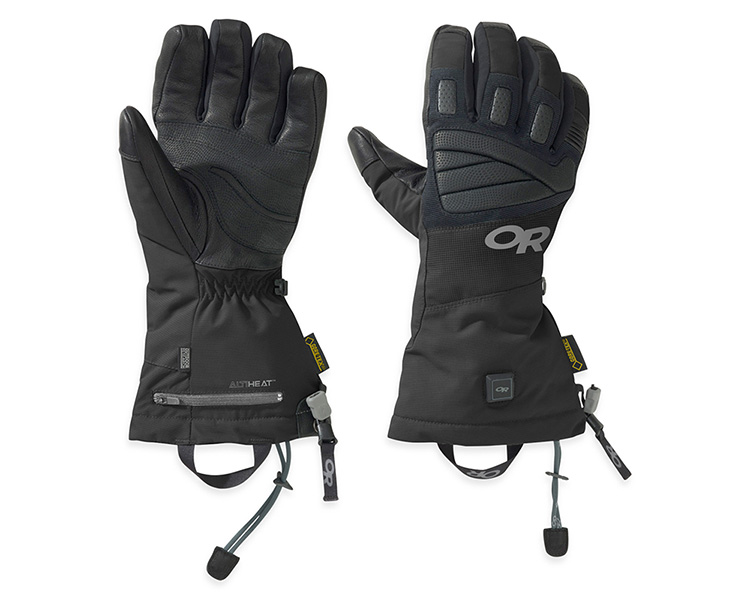 Heated gloves are nothing new, but Outdoor Research’s new Lucent Heated Gloves should be more powerful than anything else currently on the market. These Gore-Tex lined, insulated gloves can push out 60 percent more power than any other heated glove, and double the amount of surface area that’s warmed—while some gloves only heat the fingers, the Lucent heats both the front and the back of the hand. And this despite boasting a battery life that is on par with any other glove on the market: 8 hours on low, 5 hours on medium, and 2.5 hours on high. $350.

Sometimes the best materials are built by nature. Granite Gear has spent 15 years playing with different materials for the frame sheets that support their backpacks—then took some inspiration from the ski world: “We decided to see if a composite similar to a traditional wood core ski would perform,” notes Granite Gear co-founder, Dan Cruikshank. “We were amazed that the maple core turned out to be lighter and stiffer, allowing for greater load capacity.” The Trace Access 70 is rated to carry 60 pounds, but weighs a mere 4 lbs, 3 oz—about a pound less than your average expedition size pack—an especially impressive weight considering this pack does not skimp on progressive features, like the pivoting waistbelt and shoulder straps, side access zipper, and internal compression straps. $350. 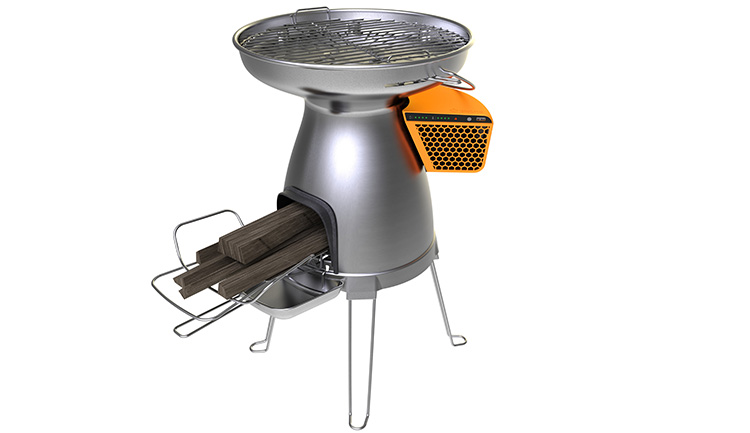 Chuck your old propane barbeque. Biolite’s the BaseCamp has a 13-inch grill that can fit eight burgers, generate 5-watts (enough for a tablet), and a side port that allows you to load wood and other natural combustibles from the side. Biolite has been grabbing headlines since the company launched its natural fuel, energy-generating CampStove in 2012—a small but nifty way to cook for one or two early adopters. But the BaseCamp is a grill that can deliver the company’s natural-fuel, energy-storing recipe to the masses, and we can’t wait to get some patties on it. $300 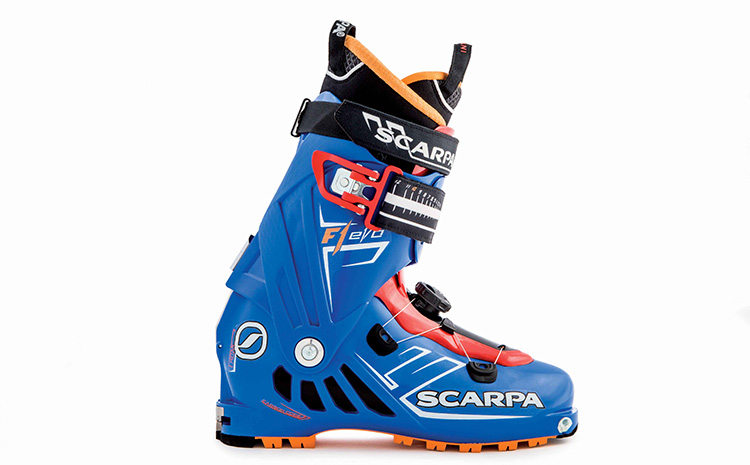 Call it a smart boot. The Scarpa F1 Evo is the first touring boot that automatically switches modes from walk to tour. Click in and the F1 Evo locks into a downhill ski mode—SCARPA claims it has downhill performance like the powerful Maestrale. Release the binding, and the boot relaxes into flexy tour mode. That would be impressive enough, even before you factor in the 2 pound, 7 ounce weight, carbon-fiber frame underfoot for efficient power transfer, and the gram-saving BOA closure—the first ever on a rigid tongue ski boot. Add it all up, and the verdict is clear: This is one of the most innovative touring boots to come along in years. $700 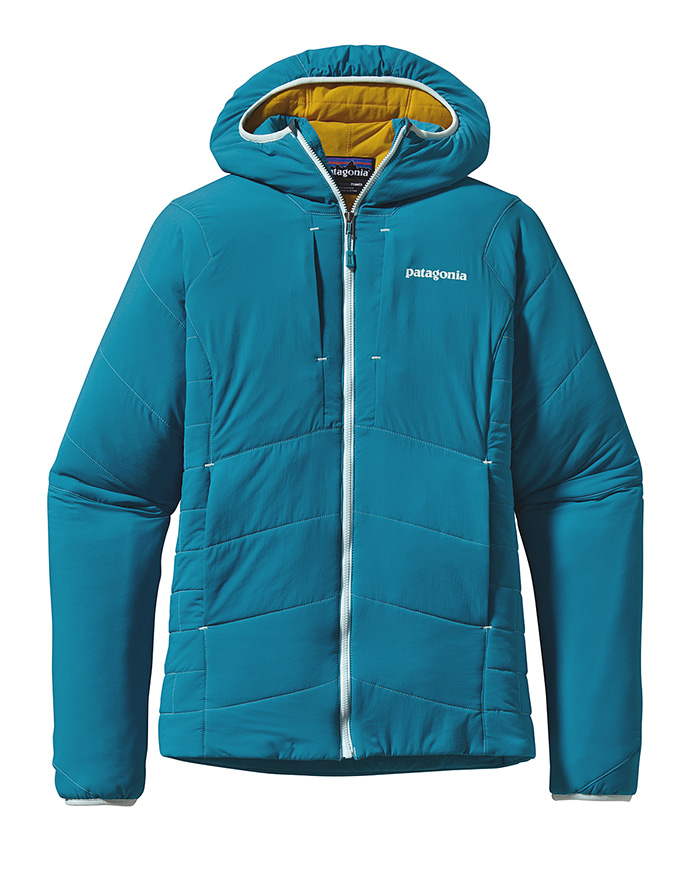 Any synthetic jacket will keep you warm. Not many are built to keep you warm and move like this one. Patagonia built its Nano-Air with a new stretchy polyester insulation designed by Toray (going by the name “FullRange”) that has a Gumby-like quality—paired with the mechanical stretch of the ripstop nylon outer, this piece offers unrivaled mobility among jackets of similar weights. Bonus: Patagonia is boasting that the stretchy material will offer both unprecedented breathability—making it a direct rival to Polartec’s award winning Alpha insulation from 2013. The stretch-and-breathe insulation is an emerging trend in winter jackets, and the Nano Air is currently at the head of the pack. 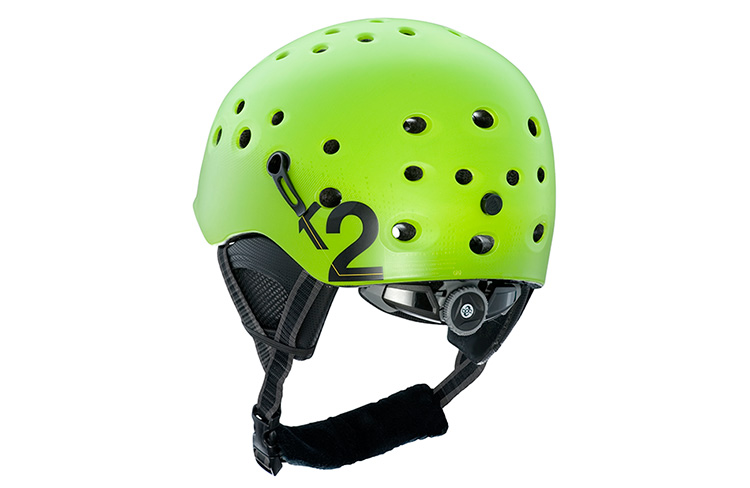 You’ve only got one brain. So why keep switching helmets to protect it when you move from ripping the snow to riding your bike? K2’s new Route says that decision is now moot. Billed by the brand as the lightest helmet on the market (we do still want to get it on the scales for a “head-to-head” test), the new uber airy design is certified for ski/snowboard and bike use. A full wrap liner with Boa Technology ensures a custom fit, while Ultra-Cored technology gives the helmet maximum breathability on the trails or the slopes. There, now you only have to keep one helmet in your gear closet—or on your head. Plus, it looks awesome. MSRP: $150

Atomic took one of the most influential, versatile big mountain powder skis of the last five years and radically improved it. The new Bent Chetler—the pro model ski of California-bred shredder Chris Benchetler—is lighter and more durable than its predecessor, and features a new rocker technology Atomic has dubbed HRZN Tech. The result is a proprietary blend of ABS sidewall construction with across the ski (i.e., horizontal) rocker for increased surface area in the tip and tail to improve powder control and float. A carbon insert laid directly onto the core in front of and behind the binding (Atomic’s Sprocket Power Booster), increases stability and power transmission underfoot. What this means in ski bum terms is that it’s easier to slarve in steep and deep conditions, arc on open faces, and throw big spinning floaters off backcountry pillow lines like an acrobatic cat. If you were ever dreaming someone would design a pro model just for you, this is it. Specs: MSRP: $800; Sizes: 178, 185, 192; Radius: 19m/185cm; Waist Width: 120mm. 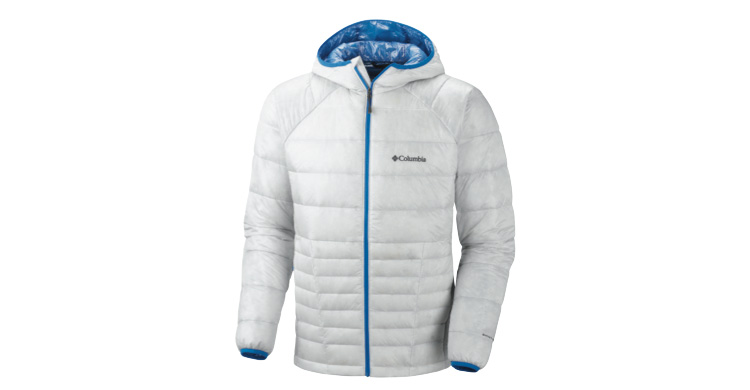 It’s all about the layers. Columbia’s Turbodown insulation is a sandwich of heat-saving technologies—Columbia’s iconic, infrared-reflecting dots (in both the liner and the inside of the face fabric), a layer of synthetic insulation, and a layer of 850-fill down insulation—all working in concert to trap heat. We love the cover-all-bases approach to insulation as much as we admire Columbia’s chutzpah in differentiating Turbodown from other similar jackets out there. The company is calling out which specific jackets Turbodown beat in Columbia’s own testing (“third-party verified,” the company says). Columbia reports Turbodown was 8 percent warmer than the Marmot Zeus, 13 percent warmer than The North Face Thermoball, 16 percent warmer than the Patagonia Down Sweater, and 23 percent warmer than the Patagonia Nano Puff Jacket—all among the top selling sweater-weight jackets on the market. We can’t verify the testing, but we have gotten our hands on early samples and were truly impressed by how warm, light, and compressible the Diamond 890 TurboDown Hood Jacket ($325) was. It’s no doubt, one of the most creative and technology-driven jackets of the year. $130-$325.

The new Sherpa 100 packs in plenty of power, but doesn’t weigh you down – at less than 2lbs. Previously, the bulk of devices needed to power laptops, a/v equipment or multiple smaller items made them inconvenient to transport. Goal Zero has introduced this 98Wh, 26,400mAh power pack with a variety of output options including 2 smart USB’s, a dedicated laptop port (kits available for your specific model) and a 12-volt port for lighting and other devices. The optional inverter attaches seamlessly to provide a standard AC wall-socket style output in the event adapters or UBS’s don’t fit the bill. The pack recharges from the sun, using portable solar panels available in multiple sizes, or from conventional car and wall sockets. $349.99 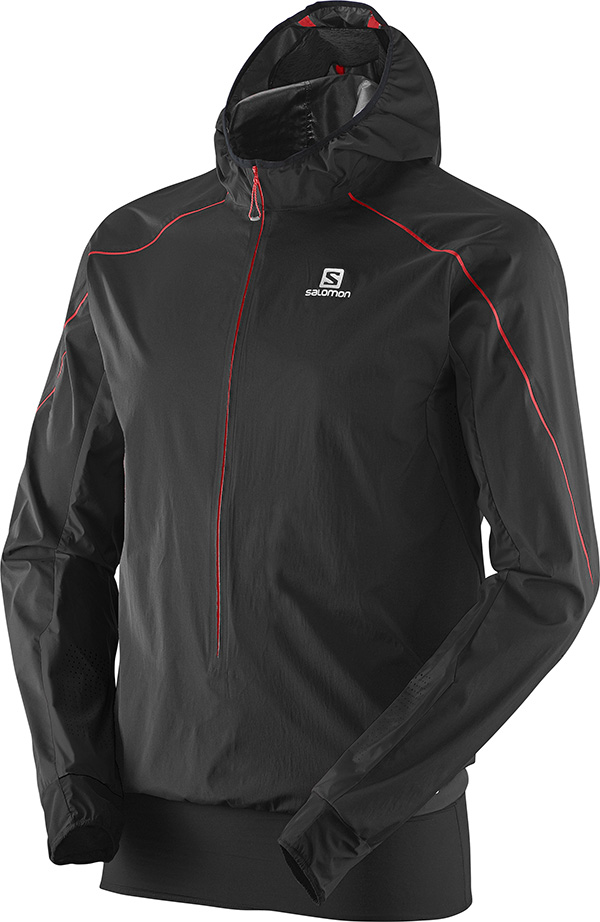 When you’re running in a waterproof jacket, you’re constantly taking it on and off as the weather and your core temperature change. But with Salomon’s S-Lab Hybrid Jacket, you don’t have to stop. When you’re running a little hot, you can unzip the jacket and roll it up around your waist, tucking it into an elastic band around them hem, without ever breaking your stride. The other feature we love is an elastic headband that keeps the hood snug around your head—a better design than the hood drawstring design most running shells jackets inherit from alpine shells. This is a top of the line jacket that costs $275, but the designs should trickle into Salomon’s less pricey jackets.