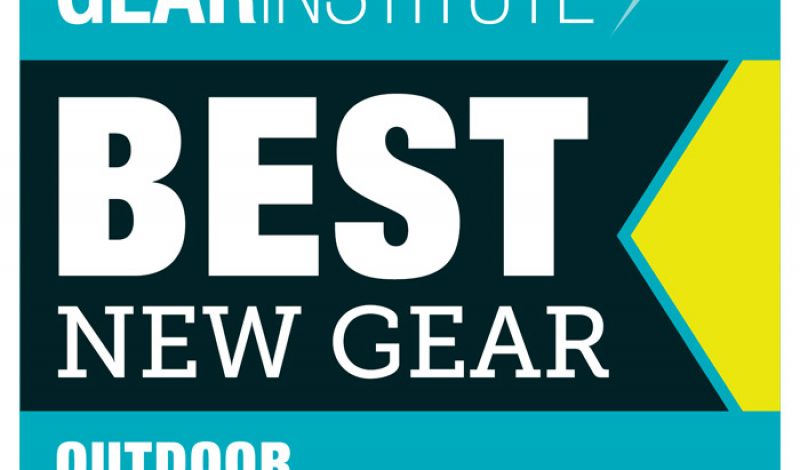 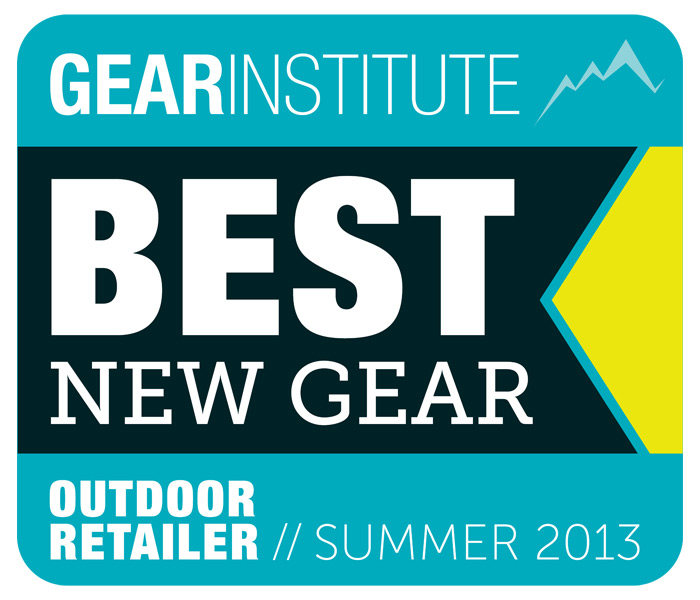 Our picks for the most innovative, exciting, and trend-setting products being unveiled at Outdoor Retailer Summer 2013. 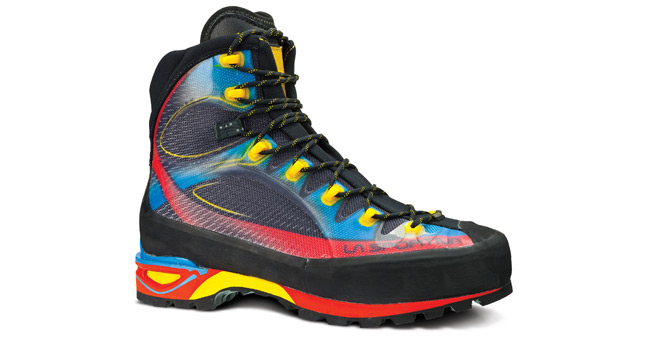 There are few sports in which cutting ounces counts more than in alpinism, and Sportiva’s new Trango Cube GTX has dropped a bunch of them. At just 24 ounces for a Men’s 9, the Trango Cube GTX could very well be the lightest mountaineering boot on the market—11 ounces lighter than Sportiva’s workhorse Nepal Evo GTX (one of the most popular mountaineering boots available) and its four ounces lighter than Sportiva’s previous ultralight champ, the Trango S Evo. Sportiva’s designers spent nearly three years perfecting this boot, which features a one-piece upper (no seams or eyelet holes at all), GoreTex Performance Comfort Liner, and a new Vibram “One” outsole. $375.

It was cool enough that this ultralight, 27-liter daypack stuffs into its own pocket (a hidden security pocket) and packs down to the the size of a large PB&J. Then you throw in the expandable bottom compartment, which opens up its volume by another 5-liters. Then there are the straps that appear out of nowhere and turn it into a duffle. Then there are the details, like locking zippers on all the entry points and multiple compression straps and external lash points. It’s an amazing international adventure travel companion—a backpack in a pocket of your carry-on, or a carry-on that disappears into your backpack. The best part: It’s weighs just 14.5 oz., and costs a mere $80.

Tent poles are not usually that exciting—except in a blizzard when they suddenly break. But Easton’s new Syclone tent poles are generating a different sort of excitement at this year’s Outdoor Retailer show. Easton is claiming the Syclone poles, which are made from “S-Glass composite” fiberglass, are the most failure-resilient tent poles ever developed—80% more resilient to “Oh shit” moments than the current leading aluminum poles. And they do so at the same weight and price as aluminum poles. This video of Easton’s own, house lab tests shows the Syclone poles flex further and with better integrity in 60 mph winds than than the aluminum poles (which fail). 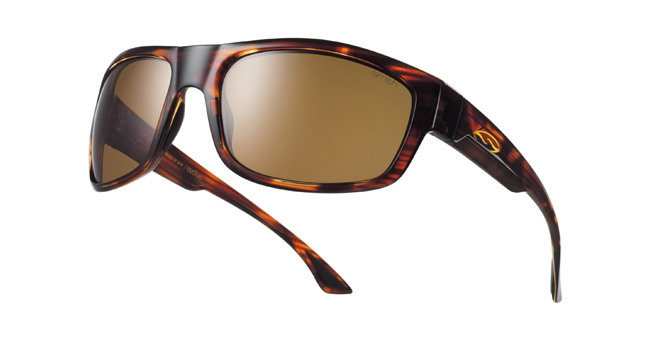 We’ve seen the glory of the Chroma Pop, and we can tell you its real. Smith’s new color enhancing Chroma Pop lenses are noticeably, undeniably clearer and more vibrant than any other polarized, polycarbonate lenses we’ve tested. Honestly, we can’t explain how it works. The only way to describe the effect is that Chroma Pop turns the saturation up on every color, so colors pop like no polarized glasses you’ve ever worn. Smith says the lenses “eliminate color confusion for the brain,” allowing it to register true colors faster and with greater precision. “When light passes through a traditional lens, there are points where light waves intersect and the brain has to work to decipher whether it’s seeing red, green or blue,” the company said in its announcement. “With ChromaPop lens technology, the color intersections are blocked so the brain immediately recognizes true vibrant color as it should be seen with increased depth and detail of objects, while reducing eye fatigue.” Whatever is going on, we love it. Smith is rolling out Chroma Pop 15 existing frames, as well as 6 new styles, like the new Dover, seen here. $209.

Snow Peak’s new headlamp is keeping an eye on you. When you lift your head, the light responds to the movement and the beam raises along with your head. When you drop your head—say, to tie your boots—a counterweight shifts the beam downward inside the lamp housing. “In recent years we’ve seen most headlamp innovation plateau and consist only of increased lumen output. So we decided to completely reimagine the form and function of the headlamp,” says Joey Tuma, Snow Peak North American sales manager. It’s also one more step in the cool trend of “smart headlamps”—which was kicked off by Petzl’s user-programmable MYO XP, followed by the Petzl Nao, a lamp that automatically adjusts its brightness depending on the ambient light. 90 lumens; 2.5 ounces. 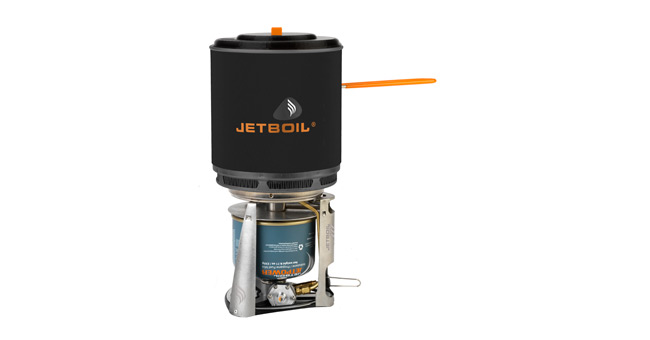 Jetboil set the outdoor industry on fire when its original heat-exchanger stove hit the market a few years back—the first backcountry stove that could boil a liter of water in well-under three minutes. The new Joule represents the most significant design advancement we’ve seen from the company since that initial launch, and it looks very promising. Featuring an inverted fuel canister (that is still stacked beneath the pot), the Joule should perform significantly better when the fuel canister is nearly empty, as well as in cold weather—down to 10-degrees F, according to the company. The 2.5-liter pot is built to cook—not scorch—food for 3-5, meaning it should to quickly become a staple at base camps around the world. 25.2 ounces; $160-$200. 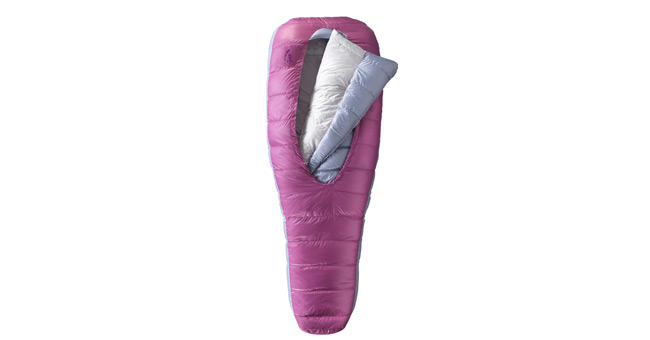 A zipperless sleeping bag? Yep. And a damn warm one, we predict. The Sierra Designs’ innovative Backcountry Bed is accessed via an opening right down the middle, and closed up with a comforter that seals out in drafts but won’t restrict your movement as you shift around at night. The bag is stuffed with top-shelf 800-fill, hydrophobic down—the kind that springs back to life almost instantly after being drenched—and is rated to 15-degrees ($399) or 30-degrees ($349). It’s a mummy bag minus the claustrophobia, but without the dead space that makes roomier bags sleep colder. 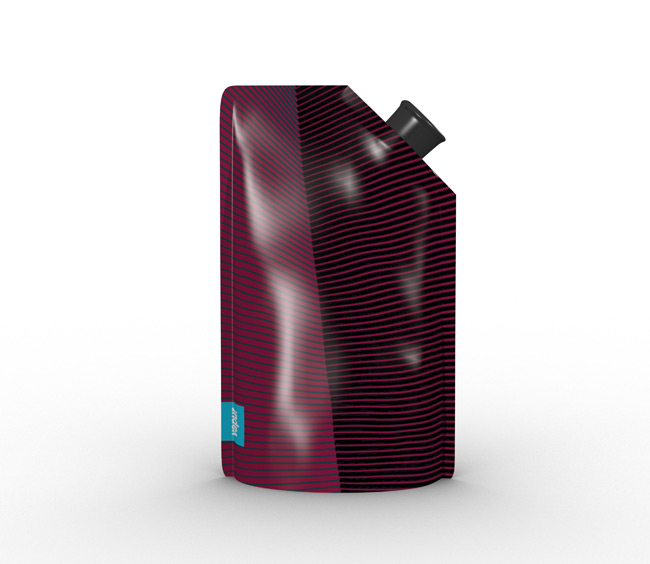 Whiskey is the spirit of the backcountry, and so it was a curious move when Platypus came out with an alcohol bladder a few years back (the PlatyPreserve) and went with wine—a classy frontcountry choice that left the backcountry market all but untapped. The up-and-coming bladder-bottle company Vapur has filled the gap with its Incognito Flask, which holds 300-ml of your favorite strong stuff in an inert plastic blatter. Collapsible, reusable, and nearly weightless, we’re happy to raise a toast to a simple product for a thirsty market. The only decision left is what to pair it with. You could start with High West in the Wasatch, Taos Lightning in the Sangres, Wyoming Whiskey in the Tetons…. $7; vapur.us 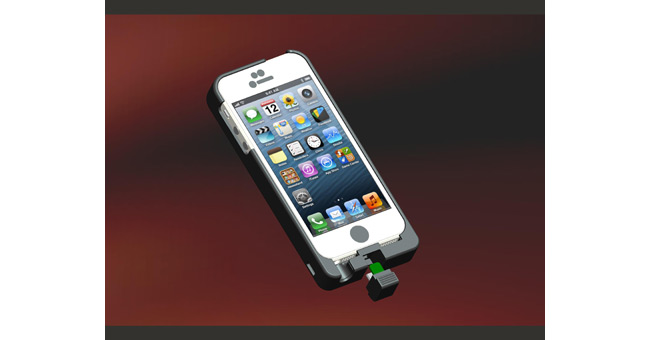 Handheld GPS devices haven’t completely merged with smartphones yet, but they’re on the way. And Trimble Outdoor’s TopoCharger is helping speed the merger. The TopoCharger is a protective case that not only doubles the battery life of an iPhone 5—it also automatically loads GPS maps of your entire state onto the phone. The maps, which zoom from 1:250k to 1:24k operate on Trimble Outdoor’s now well established Navigator app, turning your phone into trip leader for $150-$180. 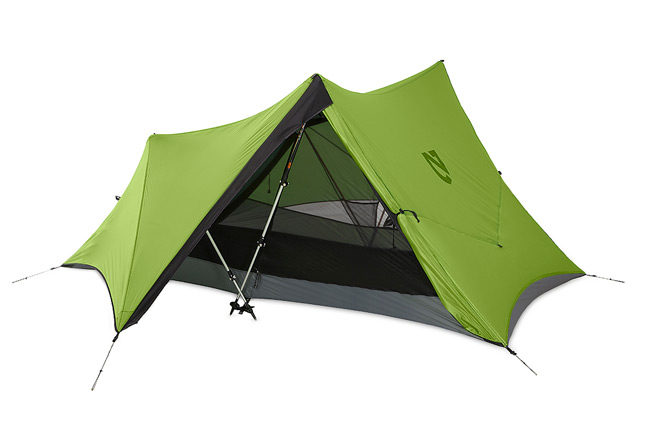 Trekking pole tents—tents that use your walking sticks as support structures—are nothing new, but hikers are definitely beginning to catch on to the benefits of these tents that ditch some or all of their traditional poles in favor of the ones you’re already carrying. And no design better capitalized on the trend this year than NEMO’s Veda—the first we’ve seen that uses not one, not two, but four trekking poles to boost interior space and livability. With two doors, two vestibules, 35 square feet of interior space, and 42 inches of headroom, the lack of separate poles translates into some serious weight savings for a tent this big: The schlep weight is just 2-pounds, 14-ounces. $430. 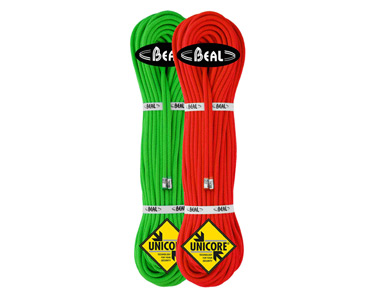 Ice climbers, alpinists, may we introduce you to the world’s lightest dynamic certified half-rope. Even with its water—and abrasion—resistant treatments, the Beal Gully 7.3mm weighs in at only 36 grams per meter. The sheath is permanently bonded to the core—a treatment Beal calls “Unicore”—which prevents internal shealth slippage, and also keeps the sheath from shucking down the core if it gets cut. For you physics majors out there, it also has extremely low impact force (7.2 kN when used as a double) for a soft catch.

Hoka One One Conquest 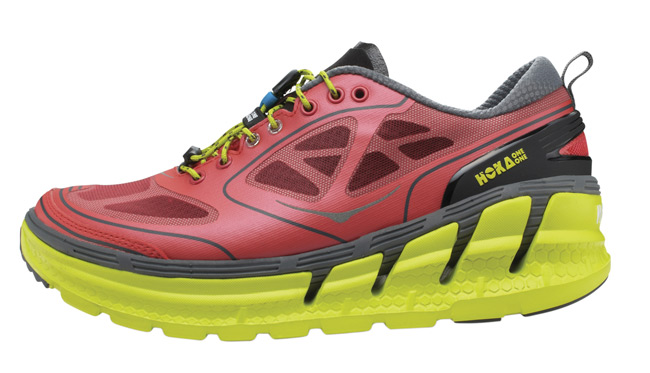 We have to hand it to Hoka. In the middle of the running shoe minimalism craze, Hoka went 180-degrees in the other direction—building the thickest, most maximalist running shoe anyone had ever seen, and bringing it to a market that greeted it with snickers and raised eyebrows. That took courage. Now, it’s pay off time. Ultra and mountain runners began flocking to the original Hokas for their leg-saving suspension on downhills (in the midst of minimalism mania, Hoka was the top-selling shoe at the Boulder Running Company). Elite athletes like Karl Metzler started trotting them out at races. Deckers, the giant company behind Teva, Ugg, and Sanuk saw the grassroots upswell and bought the company out in April 2013, boosting Hoka’s prominence almost immediately. And now, as the minimalist tide begins to recede, and runners return to cushioning with opened minds, Hoka’s best new offering awaits: the new, sweet-looking, fat boy Conquest, with its no-sew upper and water-draining midsole ($170). We’re giving it our Best New Gear Award as a nod to the vision Hoka has steadfastly held for the last couple years, and which a lot more runners are soon going to share. 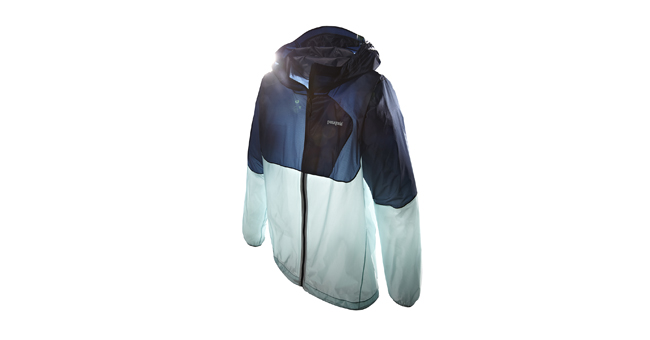 There are not many waterproof jackets you can stuff easily in your front pocket, but Patagonia’s new Alpine Houdini pulls off that magic trick and a few others. At a scant 6.5 ounces, it’s among the lightest waterproof jackets on the market—and this despite having many of the features that other ultra-ultralight jackets jettison, like a full-length zipper, draw chords in the hood and hem, a helmet-compatible hood, and a pocket. It’s just barely waterproof (10,000mm water column test), just breathable enough (we stole a sample from the show floor to check it out for a few hours in steamy Salt Lake City). The best part: It stuffs into its own pocket— a bundle about the size of grapefruit—and can clip to a harness or pack. It should serve as a go-to shell for gram-counting alpinists, and an amazing, forget-its-there emergency piece for the rest of us. 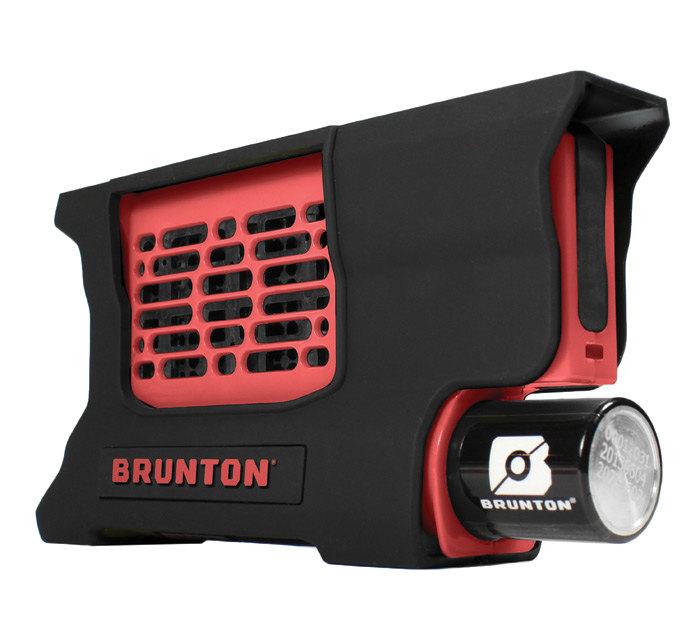 It’s the power of the future. Brunton’s Hydrogen Reactor generates electricity to charge USB devices like smartphones, GPS devices, and UV water purifiers by combining hydrogen and oxygen in a little rechargeable canister. It’s a highly compact and lightweight (8.5 ounce) system that comes with two canisters, each of which produces enough power to recharge an iPhone about six times. Spent canisters can be recharged by mailing them back to Brunton or plugging them into a $299 refueling device; extras cost $15 each. The best part: This is just the beginning of hydrogen power. Brunton is working on higher output versions that should make enough juice to power a laptop. $150. 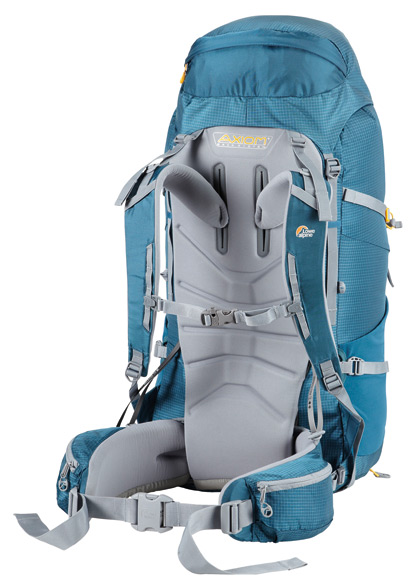 Lots of big backpacks come with adjustable back panels that let you fine tune the torso length for the perfect fit. But the systems are often clunky and time-consuming to adjust. Lowe Alpine is launching a series of weekend- and expedition-size packs with a novel adjustable back panel that allows you to adjust the suspension to the perfect length without even stopping your hike. Pull a chord on the side of the Lowe Alpine Alpamayo 70:90 and a latch releases inside the pack. Shrug your shoulders and the backpanel lengthens. Pull the other chord and the back panel gets shorter. It’s smarter than any adjustable back panel we’ve ever seen, and should make for a more comfortable fit that’s far easier to customize. $340. 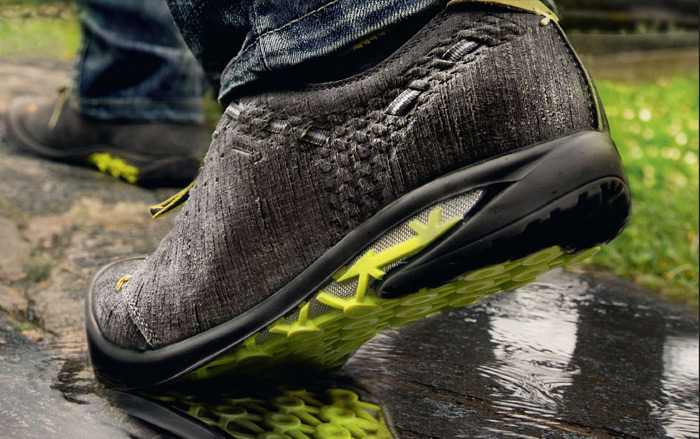 It’s hard to truly innovate in a simple category like travel footwear, but Gore-Tex and Salewa have pulled it off. They’ve teamed up to design a waterproof, nubuck leather travel shoe that breathes through its sole, making it a lot less steamy than traditional waterproof footwear. On a long trip, that should mean fewer stinky socks and blisters. The sole of the Escape is a patchwork of rubber on top of Kevlar mesh, which allows hot air to get out through the base of the shoe’s internal Gore-Tex bootie. And yes, it’s still completely waterproof if you step in a puddle. $170.