Behind the Scenes: Hueco Report II 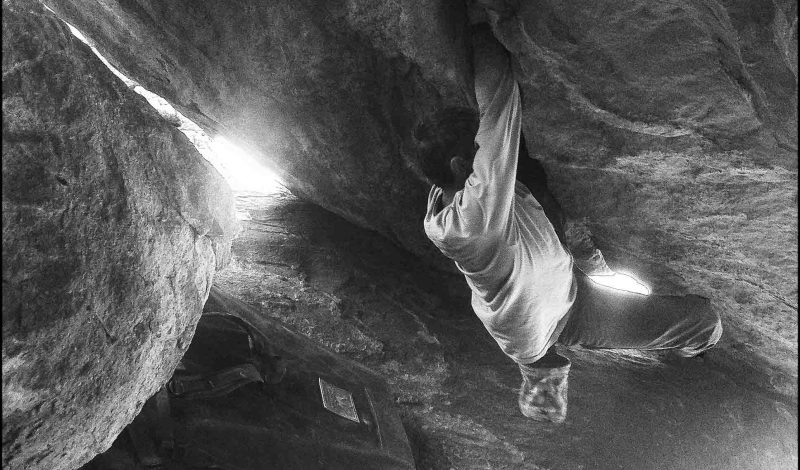 Taping in the Tanks: Day 4 in Hueco

7 am: The bright sun and cold morning air wakes me up. I crawl out of the tent, put on my flip flops, pick up the bag of coffee and walk over to the barn, passing a few trailers and scattered tents. The barn is where the coffee machine and foosball table are. A few people gather around the coffee pot, others roll cigarettes. Some, the guides, have been here since November. Others come from Virginia, France, and more.

After coffee, I walk over to the house, the late Todd Skinner’s place, plop my laptop up on the bar and get to work. People prepare breakfast behind me. I think back on the last few days. Legendary boulderer Fred Nicole walks down the stairs, looks over at me, says “hi” and walks out the door.

Day one, we rested. Day two, we pulled up to the entrance gate and waited several hours until we were allowed in. Because of the regulations no more than 70 people can be at North Mountain at one time. Once in, Brad took us — Adam Papilion, Justin Edl and I to the Morgue. Walking in, I noticed the ripples in granite on the trail and began imagining what it would be like to crimp them. The walls bordering the trail are covered in holes.

Once at the problem, we entered a cave with a floor scattered with blocks and soft dirt. The roof of it was our goal, a hand/fist crack extending for 30 feet before turning the lip. We sat on the crash pads and taped up. Justin, 30, warmed up by tossing a lap on it. I struggled on the opening moves up the steep wall — heel hooking and big reaches on locks and slopers. And again at midway where the crack widens from tight hands to wide hands. Hours go by as we all work on the problem. Meanwhile, Justin takes an-other lap.

Next, we wander over to Brad’s project, another roof crack. Like the Morgue, it also has blocks below it, as well as a cascade of boulders leading to a pit jagged pit. The crack, 4.5 inches narrowing to hands before cutting left, narrows again to fingers out the lip. We pad the landing the best we can and start working the final section. Rest-less, Justin gets in the start of the problem, stacks a hand fist in the roof and makes his way out the line. Soon he’s finishing the problem and steps off before topping out. Technically he’s not completed the first ascent, as it’s Brad’s project, but we all know it’s as good as done.

I see another roof crack in the cave. This one’s an overhanging chimney. Looking over it I say to myself: “I can do this.” Justin, again, walks over and quickly fires the line. He names it Velcro Crack. Adam and I struggle on it a few times, Brad takes a few burns on his project and soon the day is over.

Day three. We’re driving into the park in Brad’s gold truck. Talking Heads’ ‘This Must be the Place’ is playing on the stereo. Brad is singing along.

We pull into the North Mountain entrance area.

“Waiting for the North?” asks the roadman dressed in an orange vest with yellow pip-ing. We park behind the line of cars, pull out a few crates and bins and make breakfast. An hour or so later we’re allowed to enter.

We walk to Small Potatoes, home to See Spot Run, a tall face problem. I’m looking forward to finally grabbing crimps. As we explore the area, Justin finds another roof crack. We spend the next period tucked in a cave supporting him on his new project. This keeps us out of the hot sun.

A film crew, who’ve come out today to get footage of 19-year old French kid, Alban, sending V11’s, bring their gear over.

I ask Alban what he thinks of all this. Do you ever do cracks? I ask.

The film crew, Vikki, Byron and Spencer, is pointed on Justin. They’re on a one-year road trip traveling with a 30-foot trailer pulled by a ’97 red Ford F250 turbo diesel, 52 feet total.

Two reflectors project sunlight into the roof. Justin chalks up his hands and crack gloves. He’s tucked 20 feet under the roof, heading out its belly towards the middle of the cave. He falls — misses the pads and makes a low thud onto a flat rock below. Next go he completes this section, and turns the lip, about three feet off the ground, before climbing up easy terrain to the top.

“It looks cool. I don’t like really the cracks,” comments Alban.

We move the pads over to See Spot Run. More on that in the next blog.