A Self Defense Knife For Runners? 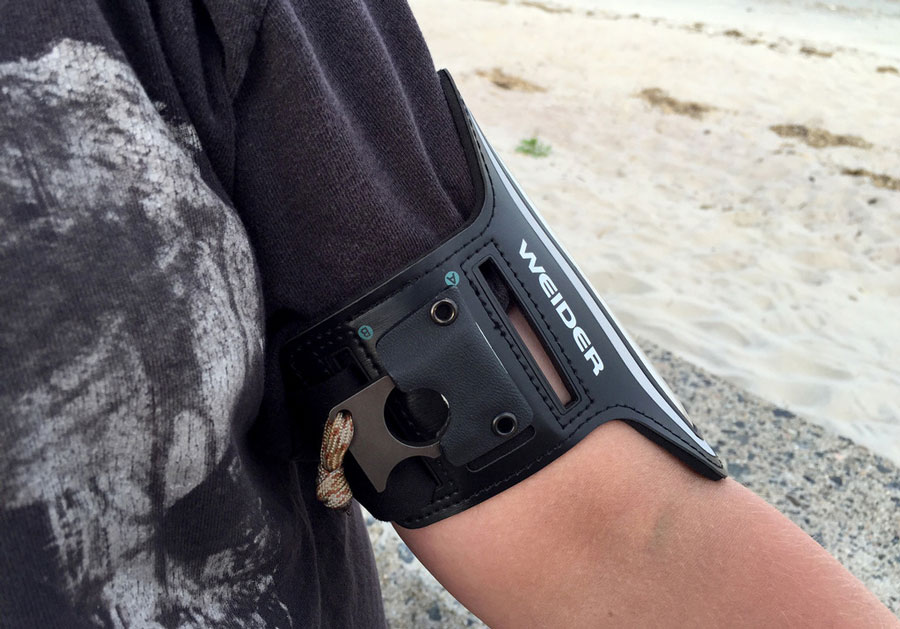 There’s a new product that is apparently gaining popularity in an astonishing way — the Titanium Runner’s Anywhere Knife, or TRAK for short. This item is well designed, sourced from high quality materials, and already funded online…like way, way overfunded. However, this product begs the question, should we be, do we need to be, running around with knives?

The TRAK has an extremely simple design. It’s quite clever actually, as it is made of a small rectangular titanium plate gently shaped to be gripped with the thumb and middle finger, and a hole in the center for your index finger. It is just the one corner that is sharpened, with  a 90° point. There is also a small hole for a lanyard, but we’re not sure whether we want to have something meant for cutting dangling off our keychains. The TRAK also comes with a custom made plastic sheath that has two holes for a cord to pass through to hang on your neck as well as other safer places.

However, there is no longitudinal blade and the only “knify” bit is the point, unlike a traditional “knife.” This is a slashing weapon and it resembles a box-cutter much more than it does a knife. In fact, if we call this a knife then we should be calling shaving razors knives as well, or those credit card shaped letter openers with a plastic tip and the blade hidden in the notch. Looking at the diagram and at my ruler to get an idea from the diagram provided on the kickstarter, we can assume the sharp part is just about a quarter of an inch length max, so calling this a knife is definitely a stretch.

The TRAK is made of titanium for its light weight and durability, with a thermoplastic retention sheath. Titanium is ultra-light but twice as strong as its equivalent in steel. It is rust proof, and doesn’t contain any iron so it’s not magnetic and therefore not detectable by many metal detectors. For this tool also the developers used the military grade stuff: 6AL4V, which they are proud to announce is the same as that on the SpaceXFalcon 9 Rocket. As for the thermoplastic retention sheath, it is a molded plastic with grommets.

What about performance? There’s a video showing the TRAK slicing through a variety of materials including a leather construction glove. That is impressive and based on the blade length, we can also assume that these cuts will be superficial; meaning only slicing on the surface and avoiding cutting a human being deep enough for major tissue or organ damage. That’s a plus, right? 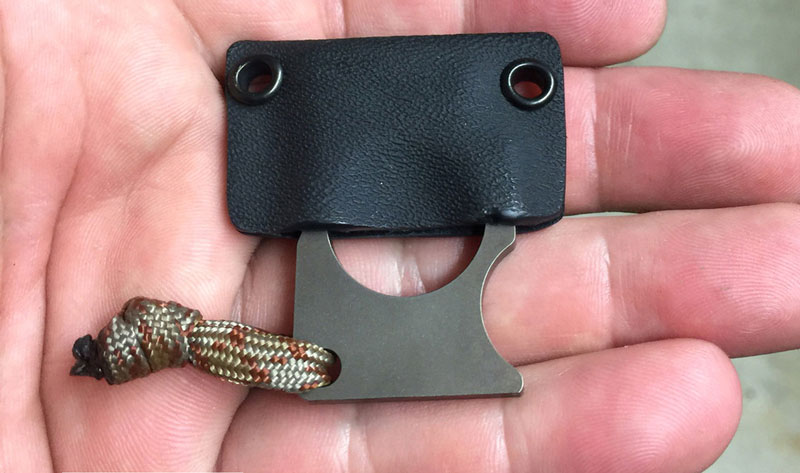 First, let’s address the premise of the campaign and answer some of the questions that are meant to be rhetorical. The designers say that this is the “perfect knife for those running alone, biking, hiking, camping or just walking the dog.” Ok, perfect for what? I can’t slice my vegetables with this, or cut wood, or even cut a decent rope. Let’s be honest, they mean to say “perfect for cutting a person that is attacking you.”

Second, is being assaulted a valid concern for runners; specifically women? Dave from Science-Based Running does a great job in his article “Are runners likely to be targets of violent crime?” After extensive research, he points out that “most murders are committed by people who know their victims. The random guy jumping out from behind a bush is responsible for relatively few murders.” He estimates that only 1 in 100,000 murders affect runners, and that’s an upper estimate. However, assaults are not murders, and he does calculate that of “about 10,000 sexual assaults per year…women face a 0.006 percent chance of being attacked in this way, or more than 35 times their chance of getting murdered in a similar sort of attack.”

Now, there are statistics that demonstrate that people are attacked while running, but would those people have been safer if they had a knife?

User Kromulent, on the popular link aggregation site Reddit, puts it into perspective in his post: “With a knife… I am likely faced with only two outcomes – one, my attacker may retreat, or two, I have entered into an extraordinarily brutal conflict that will be decided by strength and fighting skill. Furthermore, if I were to use a knife as a weapon, it would not only be reserved for the most desperate conditions, it would also only serve me for one good surprise attack. If my first strike didn’t determine the outcome, then I’d likely lose.”

We couldn’t put it any better. If you’re thinking that an assault situation is a fast exchange like what you see in popular movies, you are way, way off. The best situation you can think about is the bear fight in “The Revenant.” Leonardo DiCaprio injures the bear with several blows and even gunshots, but the bear does not go down. Why? Because of adrenaline and what you could call rage. Slashing an attacker with superficial injuries will only enrage them and make them want to hurt you more; it does not stop them and now you’ve got a mad person who already wanted to hurt you running you down. You’ve also now introduced blood into the situation which is a great way to contract Hepatitis or HIV.

Of course you won’t be fighting a bear with a glorified box-cutter, but how will you do in a self-defense situation? Having a self-defense weapon is not the same as knowing how to use it. Have you ever been in a fight or thrown punches? 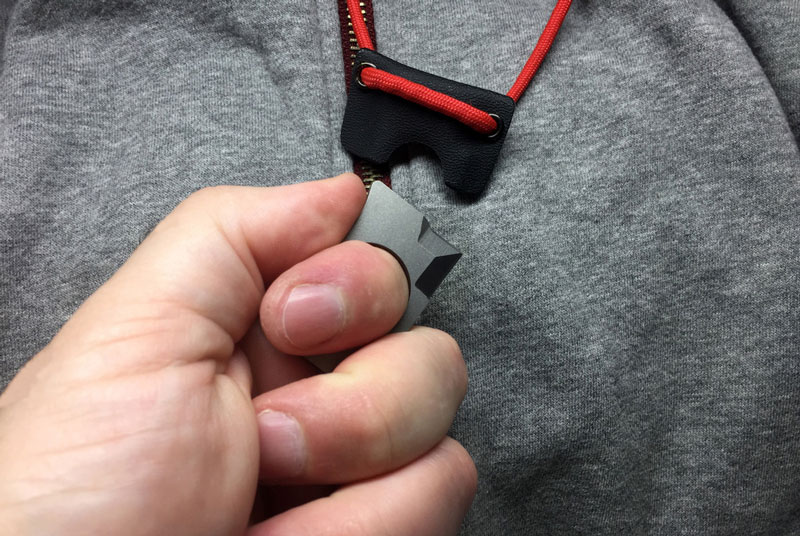 Consider how disorienting the following situation is: you’re casually running and see a person moving very quickly. Your first impulse will be to wonder why a person would be moving that way. Then you realize they are moving toward you. Well, is there something I am near, is there some reason to – and boom, time’s up and they are on top of you. Unless you train regularly to respond to completely unpredictable attacks, you simply do not have the capacity to respond effectively; much less reach for, draw, and swipe a weapon without missing and without it being deflected.

By the way, pretty much every self-defense class teaches the same thing: put space between you and the attacker, retreat. They do not teach you to engage and not with a deadly weapon that can be used against you.

Finally, a major reason not to overlook is that a knife is considered deadly force in the eyes of the law. So, if TRAK wants to call itself a knife, then people buying it should know that they can go to prison for the same sentences as they would if they had a gun. This is important because the marginal benefit of maybe getting lucky enough to strike someone with a blade and managing to get away from them as they are chasing you carries with it the possibility that you will get sued and go to jail on a significantly escalated charge.

Please read this article by an attorney who does expert witness work in court cases involving knife crimes. A quick quote gives you an idea: “Acting on what you think self-defense is while holding an item will get you into deep trouble. Weapons are like power tools, mistakes happen faster and when they do, they are bloody.”

Basically, carrying a knife for self defense is a terrible idea

Unfortunately, the developers were so preoccupied with whether or not they could, they didn’t stop to think if they should. They focus on marketing the cool features like a very special and rare titanium, patent pending design, colors and lanyards. However, they don’t mention that they are selling a tool for cutting human flesh in a panic situation, one that can land you in jail if you use it the wrong way; or use it the right way and the attacker has a better attorney.

If you’re worried, get mace

To suggest a solution for those that feel vulnerable — you can always carry mace. Mace is a non-lethal weapon and does not carry the legal ramifications that a “knife” does. Mace also creates confusion, disorientation, and retreat – factors that will allow you to escape. In addition, you don’t have to be very good at aiming to deploy mace, and even if an attacker grabs you, they will have trouble breathing and seeing. This creates for you the opportunity to break the hold and escape even if you suffer the same.

We are not advocating for carrying weapons, but there are real reasons a stone age tool is not something that civilization has embraced as self-defense in modern times.