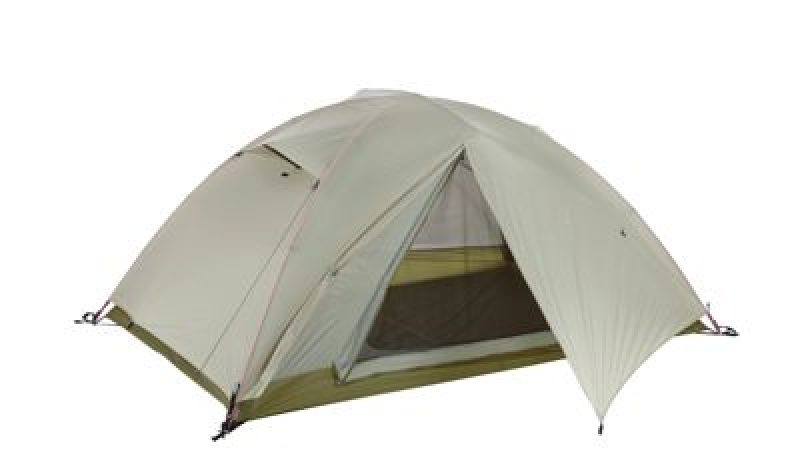 It was a good place to put it through its paces. We were camping on Grassy Island on Jackson Lake in 15-mile-long, 24,000-acre Teton National Park at the base of 12,605-foot Mt. Moran, rising 6,000 feet straight overhead above our sea kayaks. With me on the Labor Day outing, on a trip organized by OARS, was my wife, Denise, and two daughters, Brooke, 13, and Casey 10.

While OARS provided tents for its guests, my friend Bill Gamber, president and founder of Big Agnes, had me check out his new FishHook SL2 prototype, which he had just debuted at the Outdoor Retailer Summer Market tradeshow. It’s a freestanding, three-season, superlight (3 lb., 4 oz.) backpacking tent with a big interior. Most notable, however, is that it features a zipper-less door and vestibule. Instead of zippers, the tent door uses fifteen individual magnets to seal up the door – a design that earned it Outside Magazine’s Gear of the Show and Gearjunkie.com’s Best in Show award.

“Want to tell him about the rainfly?” one of his assistants asked when I picked it up at their office in Steamboat Springs.

Nevermind that that’s Gamber’s MO … anyone worth his salt in the outdoors ought to be able to figure out how to set up a tent, he reasons.

And that’s exactly what my daughter and I did as soon as we set up camp. While our guides, April Pocorus and Will Cushner, helped other clients with their outfitter-supplied shelters, Brooke and I assembled the two-person FishHook in a flat area between a tight stand of lodgepole, perfect for Capture the Flag.

It went up easily, two poles crossing in the center and then snapping into corner eyelets with plastic hooks fastening to the tent. A shorter three-section pole then snapped into a plastic groove on top of and perpendicular to the crossed poles, fastening to cool little plastic end pieces on the tent.

“These are cool,” noticed Brooke, insisting on doing them both. The result: super-roomy headspace for a two-man.

The aforementioned fly was easy to figure out as well, snapping to each corner with Fastex buckles and securing via stakes on the sides and vestibules.

Tent set, we returned to the bearbox-lined kitchen area for dinner. That’s when we noticed the clouds seemingly careening down Moran Canyon across the bay, a massive incision between Mt. Moran and Bivouac Peak to the north. Its sheer walls were soon enveloped in clouds and the wind hit with a vengeance. Before battening down the hatches, I held Casey up prone into the wind, where she flew as if on the bow of the Titanic.

Behind the wind, however, came rain, forcing us to flee to out tents, plates of dill-laced salmon and asparagus in hand. We had left the fly door rolled up, mistake #1, and the door facing the wind, mistake #2, so when we crawled in, my Paco pad had a few drops beading on its surface. But then we quickly sealed ourselves in, first fastening the four magnetic buttons on the fly and then the more-closely-space magnets on the tent door. No zipper, no fuss. And the magnets clung to each other like the clouds to the surrounding mountains.

My pet peeve with tents is always their zippers. I have two at home in varying states of disarray simply because of that one failure point—that weak spot that renders the rest of the structure useless, no matter how fancy its taped seams, star-gazing mesh material and other bells and whistles. Not so the FishHook. Unless you were camping near an iron mill, I can’t see its sealing system ever failing (but it might mess up occasional compass readings).

With that, rain pelting the fly which held fast in the gale, Brooke settled into reading her teenie-bop book and I lay down with Keith Richard’s Life (I was at the part where he started calling Mick Jagger, “Brenda”). The storm raged on, but we were warm and secure, even with the two vent windows held open between tent and fly with two Velcro’d rods.

For you bug-o-phobes, it seemed sound on that front also, though I’ll admit there weren’t any bugs on the island. The tent closures had an extra flap that draped over the magnetic attachment points, ensuring a more bug-proof seal. Still, I’m sure some of the pesky little buggers could still get in if they wanted to, but it’d be a circuitous route. Another bonus of the magnets: come middle-of-the-night pee time, they open quietly, so as not to disturb your neighbor. And if you’re sore from the day’s trudge, those believing in magnetic therapy can use them to soothe aches and pains.

In the morning, the storm had passed, leaving Moran and its Skillet Glacier shrouded in fog. Then the peaks slowly woke up, rubbing their eyes to dissipate the clouds. With that, well rested and dry, we broke the FishHook down, stuffed it in its stuffsack with clinging pine needles, and broke camp for the day’s paddle to Signal Mountain. $399.95, www.bigagnes.com